Up early this morning, we didn't feel like eating a big breakfast, so we mostly just packed and left, eating a little bit during the process. The campground was quiet but chilly, and we were ready to move on. We were a little grumpy because we couldn't find a good place to plug our computer in and sit down at the same time, and the wireless signal wasn't great either.

We hit the road, but our moods didn't improve. Talking didn't help much, so unfortunately we were still unhappy when we started pedaling up a big hill into the redwoods again. Under the shade of the redwoods, it was chillier, and our hands were uncomfortably cold, especially on the downhills. 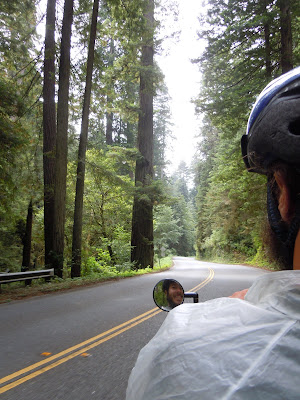 A view of a down hill. Brett wears his rain coat for warmth.
Cruising through the redwoods eventually brought our mood up considerably, and we continued to be amazed by the big trees. We stopped a bunch of times, just to take a couple pictures or even just to look around. 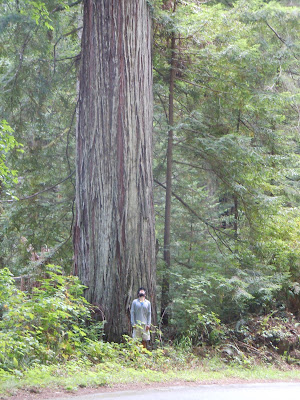 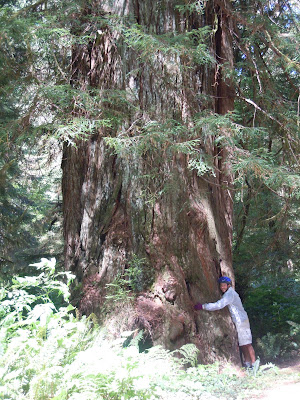 We love these trees! Brett has been waiting a long time to meet them.
Reading the map on one sign, we made sure to visit “Big Tree.” Any tree that gets named among these giants has to be worth seeing, right? Big Tree ended up being an extremely old specimen, and appropriately wide in girth. We tried to get some pictures here, but it was busy with other tourists and taking any picture of a person standing near a redwood is hard if you want to get a bunch of the tree in. 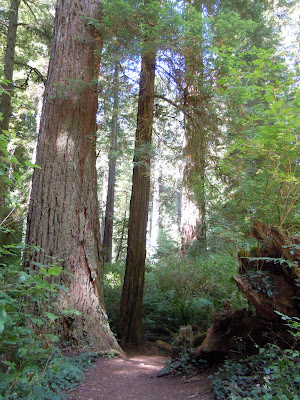 The path through the woods to get to Big Tree. 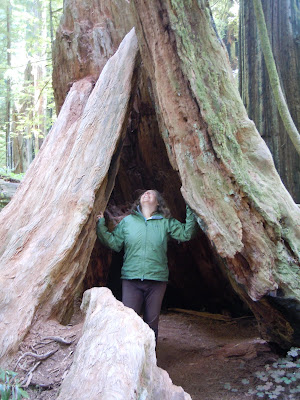 Along the path there were many photo opportunities. 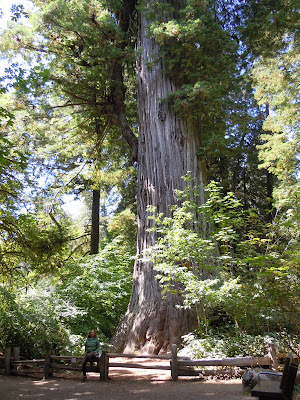 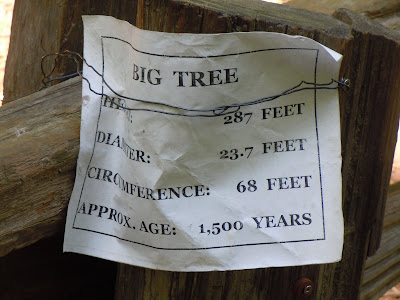 Incredible statistics.
Coming down out of the redwoods, we saw a herd of elk! At first we were very excited, because we had hoped to see elk on the trip. Then, as we realized that this herd is very complacent around people, and were happy to graze for hours right next to the road, the excitement wore off a little. Of course, it's still great to see such big animals at a reasonably close distance, ostensibly in the wild. 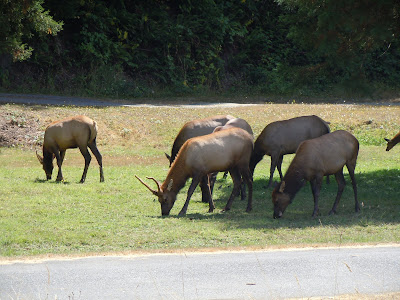 Elk! They are pretty big.
A little further out of the redwoods, we ate lunch at La Hacienda, a Mexican restaurant. This long break did us good. It gets chilly when we go down, and there were a bunch of descents this afternoon. Since we are following the coast, any time we go up, we come back down. The wind takes a lot out of us. Outside the restaurant there was a very large part of a tree on display, which we admired after our meal. Part of the display talked about the economy of this area being based on the big trees over time. Eighty to a hundred years ago they were logging them, and now their economy is based on the tourism the great redwoods generate. It was really interesting to think about. 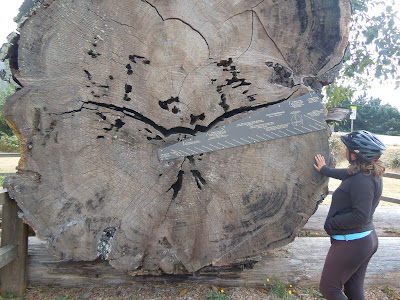 Jenny checks out the time line of historic events that occurred during the life of this tree.
After our lunch break, we stopped for a snack of blackberries as we pedaled out of town. It was only mid afternoon, but the biking just wasn't coming easily to us. When we came to a campground, we pulled in and decided to take a break and possibly stop for the day, instead of making it all the way to our friend's house in Arcata as we had planned.

The campground was nothing special, but Jenny especially just wanted to stop for the day and lay down. As we set up the tent, another herd of elk wandered within range of sight, between us and the highway. They weren't very exciting to watch for long, though. There were actually two campgrounds with the same driveway, and unfortunately we didn't notice the other one until after we'd already paid for this one. We could have saved $5 and stayed under the redwood trees rather than in an empty RV park. 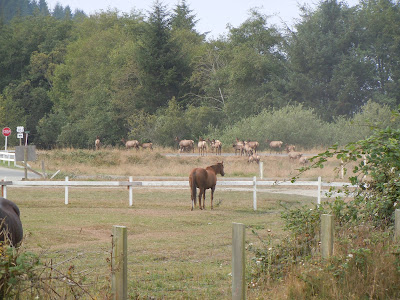 We were tenting right next to a horse farm, and beyond that you can see the herd of elk crossing the road on their way to somewhere else to graze.
Jenny rested in the tent while Brett worked on the blog. He was sitting out in the cold by the office, which was closed. He hoped the caretaker would come back with the password for the Internet which we'd forgotten to ask for when we signed in. Eventually, he did get the password, and he did some work on line in preparation for next week back at work. After that, we snacked some, and pretty much went to bed feeling grumpy.

There were a bunch of reasons we weren't feeling good, but one of them is that sometimes it's hard for us when we change our plans. We waned to simply rest, but we also wanted to push on and get closer to our goal of San Francisco. After taking the day off recently, we figure we have just enough time to get there and ship our bike before flying out early on September 7th. Hopefully, our short day today won't set us back too much. 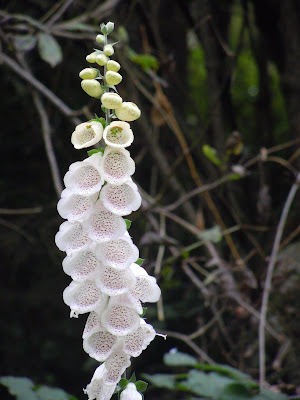 Even though it wasn't the most pleasant day, there were still beautiful and fun parts. We still got to see amazing trees and several flowers like this.
Posted by Jenny at Sunday, August 29, 2010