We weren't sure we would leave Bozeman today at all. It seems like such a fun town, with a flavor somewhat like our own town, Northampton, MA. When we got up in the hostel, we thought we would take it easy today and get some things done on the computer, and then maybe leave by 11 or noon, or maybe decide to stay. The morning was spent packing up, and then at the co-op eating and working on the computer. 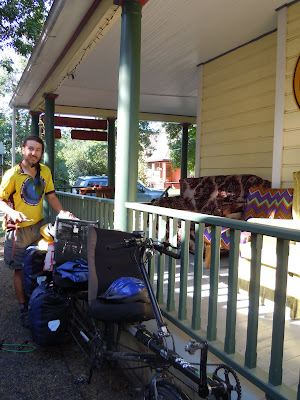 Ready to go after a nice night in the hostel. 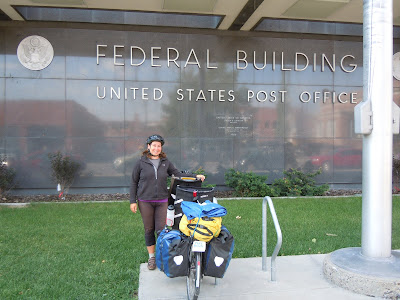 On our way out of town, we mailed a package home with a few things we no longer needed to carry. 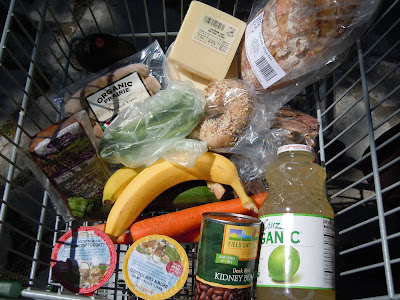 Our beautiful bounty of food in our basket from the co-op!
In the end, we took a lot longer on the computer than we had hoped, and after some grocery shopping at the co-op, we finally set out at 2:45. We weren't sure how far we'd make it leaving so late, but after we got outside of Bozeman, the miles just flew by! We must have been going slightly downhill for quite a while, because we had a average speed of 12 mph when we reached Manhattan! What fun!

We walked through a farmers market, where we bought a whole plate of caramel nut brownies and lamented the fact that we'd just stocked up on produce. Some of the locals were very inquisitive, very friendly, and very supportive. Continuing on Frontage Road, we hit construction a couple times. The first time we simply rode through it, though Brett's timing chain came off again near the end. The second time we saw construction coming up we tried to avoid it. We tried a bike path that dead-ended at a stream with bridge abutments but no bridge. We went back a little and then got on a bike path a little further on that successfully avoided the construction, but it was quite a little detour. 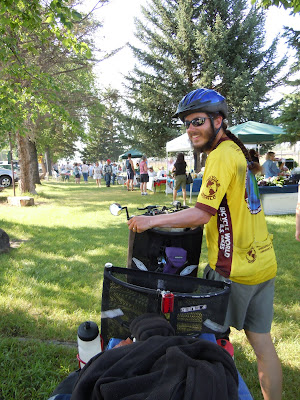 We had a nice stroll through a farmer's market. 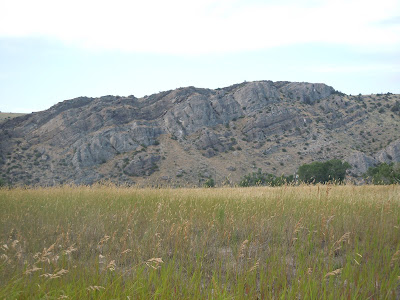 Fields and mountains.
Coming into Three Forks, we had to make a decision: continue to follow Route 90 with the possibility of Frontage Road, or take Route 2 through what seemed like a longer but possibly less hilly route along a river. After a snack and a phone call to a friend back home, and a chat with another touring cyclist passing through, we chose the shorter route. 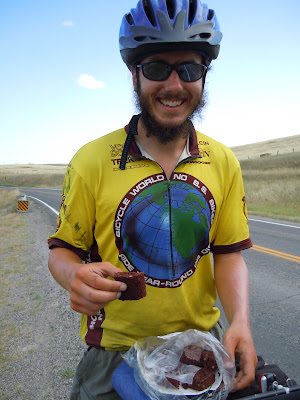 We break for brownies.
What a crazy next section we had! We felt like we were climbing another mountain pass! Route 90 just kept going up and up and up. It didn't get really steep, but it was super long, especially since the daylight was waning and our bodies were getting a little tired. The sun set and we kept climbing. Dusk turned to dark and still we climbed. Brett had to turn his front headlight on to feel confident about where he was steering on the shoulder of the big highway. 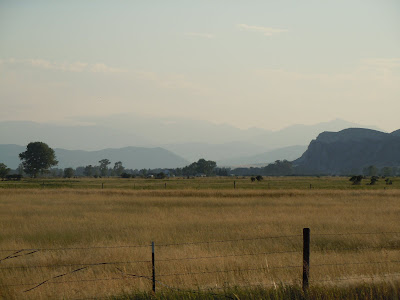 So many different ridges in the distance!
At last, we started to go down. It was well past dark, and the air was chilly as we started to descend. Jenny already had on her fleece, and Brett put another layer on as well. We went faster and faster down a huge hill, though Brett was in control the whole time, never allowing us to go too fast. He used mostly the drum brake, but also the standard brakes, too. It was fun, but really kind of scary as well because it was so dark and there were some curves. At one point we crossed the rumble strip because it felt safer in the roadway while no drivers were behind us. Another time we had to ride in the lane again because we passed a truck that was stopped on the shoulder. Then we started to slow down a bit and there were no more curves, and we pedaled the last little bit to the exit. 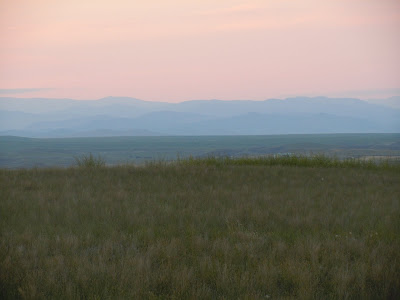 A view off into the distance as it starts to get dark. We climbed a lot higher after this photos was taken.
We had no idea from our standard road map that when we decided to head on from Three Forks and took the highway we'd meet such a large hill. We were elated and relieved to be done with it and down the other side. We found the campground behind the gas station just off the exit at 10:23, and set up our tent. Looking at the bike computer we realized we'd gone sixty miles even with our latest start of the whole trip! Crazy.
Posted by Jenny at Wednesday, August 04, 2010