Brett was up first this morning and got to have a nice long phone conversation with his mom while Jenny slept. Once we were both awake, the day began as it usually does with some breakfast, taking down the tent and packing up. Brett cooked up some eggs with salami, cheese and broccoli. It was fun to have so many bikers around to talk with over breakfast! 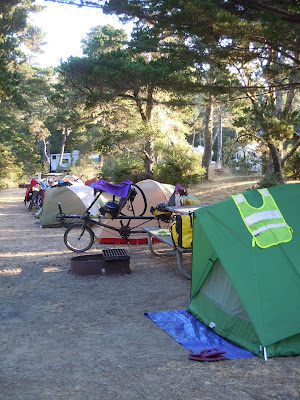 Morning at the campground.
At 9:26, we were, for the second day in a row, the first to pedal away from the campground! All these other bikers are making us feel good about our recent early(ish) morning starts. We were excited to get going today, partly because we knew that we'd make it through Port Orford. We knew that there would be a package from Brett's mom waiting for us at the post office there! And in that package, we had a guess that there just might be homemade chocolate brownies waiting for us.

As soon as we turned back onto the highway, we hit traffic. Yes, even on a bicycle, traffic still can cause delays. The bridge just ahead is under construction, with only one lane passable, and sometimes they close even that for the construction workers to use. After a twenty minute wait, we finally got our turn to go across.

This morning was misty along the coast, and the pictures were amazing! Well, they would have been if our camera had been charged. We tried to charge our camera off of our laptop, but the laptop had almost no battery left, so we only got enough charge into the camera for one shot. We were sad about the lack of pictures, and sad for yet another delay, but we couldn't stay sad long with such nice views. 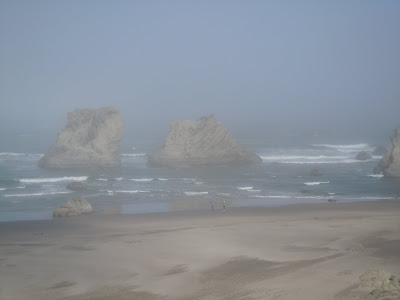 The only shot we have from our morning ride. The views were breathtaking with the mist so thick over the water.
A couple hours into our day of riding, we came across an exciting place to stop: a pick-you-own blueberry stand!! We excitedly tied some plastic buckets to our waists and headed out to pick. There were several varieties, and we sampled and picked a bunch before we finally decided that we had enough. We might have picked more except we were afraid they might go bad before we could eat them all. We did get several pounds, though! 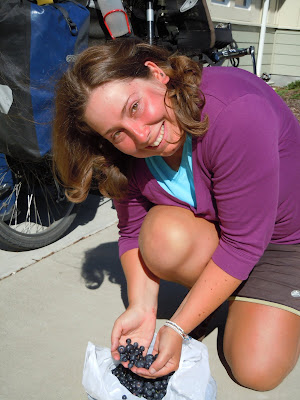 Jenny shows off our blueberry score. No pictures of us picking them because the camera was out of battery.
Only a few miles after our blueberry score and snack, we came upon the tiny village of Langlois (with a population of 50 according to our map) that has an outstanding deli. We bought two sandwiches, and both were amazing! As we were finishing up and getting ready to move out, the three guys we'd stayed with two nights ago (and last night) came pedaling up. It was fun to see them, and we told them the sandwiches were the definite choice!

After lunch, we had fourteen more miles of (camera-less) biking before we pulled into Port Orford. We were so excited, the first thing we did was ask directions to the post office. When we got there, we knew we wanted a picture of the package, so we charged the camera in the post office lobby for just a minute or two, enough for a couple shots. There were so many yummy treats and snacks in the package from Kathy! We were amazed at how much food she was able to get into one box. Thank you! 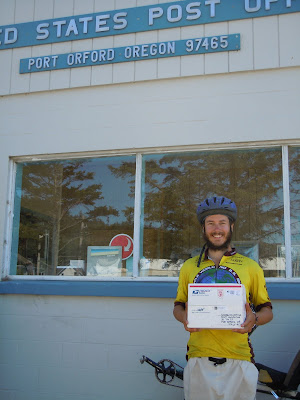 Yay!
Next, we went to the library, backtracking half a mile. Going back the way we had come was with the wind, letting us know just how much the strong wind has been slowing us down today. We spent a few hours charging our electronics and using the Internet. We also made some phone calls, dealing with things back home with the rental house. Right next to the library was a food store, and although we had enough treats to last us, we picked up some more food for square meals. We also checked the hardware store in town for fuel for our stove, but no luck there.

The library was a good rest stop, but we still wanted to get a good bit further before camping for the night. For several miles south of Port Orford we were biking right along the coast, but up on the cliffs. It was from there that we first noticed the whales spouting in the Pacific Ocean. What an amazing sight! The whales (there were definitely several) didn't seem to be doing anything more than hanging out somewhat near the rocky shore, but it was mesmerizing to watch for them to surface just enough to spout out their last breath and take in a new one. It was hard to get a good picture, because they didn't necessarily surface in the same place, but we had no trouble watching them some more until we got a few good pictures, and perhaps a good video clip. 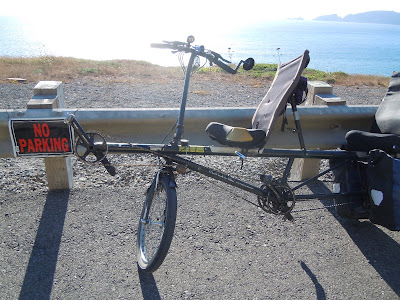 No parking... but there are whales over there! 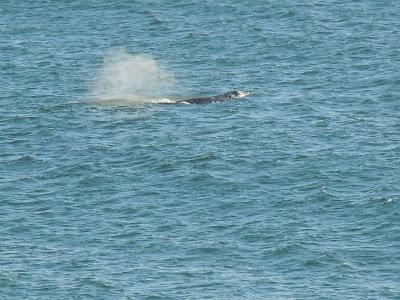 Whales are amazing creatures, and we feel really lucky to have caught a glimpse of some!


We tried to capture the spray on video.
Finally tearing ourselves away from the whales and applying ourselves to the task of moving further south, we soon came upon Humbug Mountain State Park. The sun was beginning to set, and we suspected that there might well be some friends staying in the hiker/biker area there so we were torn, but we decided to press on because we wanted to get in more than 35 miles today. 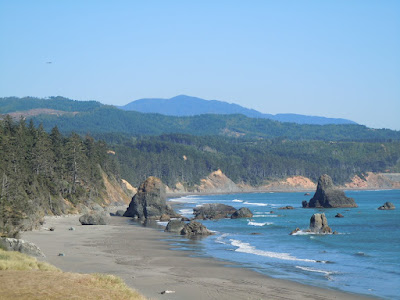 It is amazing to be so close to the ocean all day. 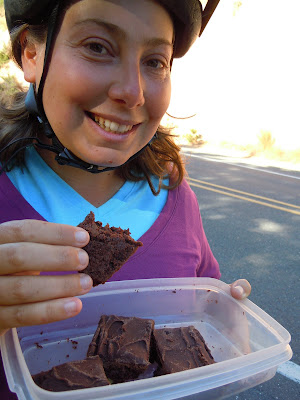 Mmmmmmm!!
Traffic was light, though the light was waning quickly. We happily pedaled another ten or twelve miles before we had to make another choice. The Adventure Cycling Association route would take us off Route 101 and to several options for camping in ten to fifteen more miles. But, the closest camping option was further along 101. We weren't sure why the route deviated from Route 101 anyway, and we were starting to get tired, so called ahead to the nearest camping spot, an RV park just off Route 101. 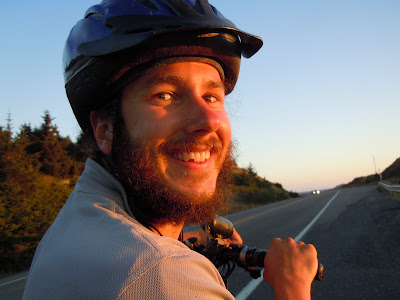 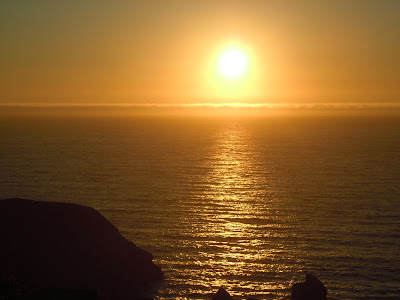 The lovely sunset.
When we got to the RV park, however, a mean man greeted us, and told us flat out that we would not get the rate that we told him we had been quoted over the phone. He told us we must have misunderstood the woman we spoke with. Brett was sure of what he had discussed explicitly with the woman on the phone, and we again had a decision to make. Should we just stay and pay a few more dollars than we were quoted for what looked like a nice RV park, or should we move on and try the next RV park only a few miles down the road?

Again we called ahead, even though the daylight was getting pretty dim. A pleasant man answered the phone and quoted us a fair price, so we decided to push on once more. We just really hated the idea of supporting a business that was so mean! It made us really angry, so when the man came back and brusquely asked us if we had made up our minds yet, we told him we would keep going because he didn't stick to the price quoted. He didn't seem to care.

Before we reached the next RV park, it was dark, but we had our headlight on and our taillight blinking behind us. We found the place, and it turned into a very happy ending for the evening. The man there was really friendly, and although he charged us the rate he had quoted over the phone, he let us stay in a spot closer to the wireless Internet signal rather than the usual spot for tenting. We were so thankful, and we explained to him why we had left the other RV park. He said he's heard things like that before. Sheesh!

We were hungry and it was dark. We set up the tent and then had lots of snacks: blueberries, crackers, nuts, etc. We did have to listen to a really upset couple a few doors away argue with each other, but that didn't keep us from falling asleep with our electronics plugged in and our head on our comfy pillows. 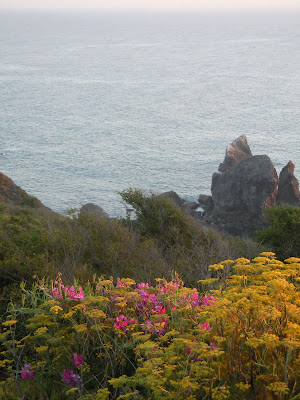 A bonus shot for the day. The views were amazing this afternoon!
Posted by Jenny at Wednesday, August 25, 2010