We were up and out of the tent around 9:00, after a somewhat restless sleep and a slow morning waking up. Just as Brett started cooking some breakfast at our picnic table, a light rain started to fall. We moved ourselves and our food undercover to a little sitting area near our campsite. While we finished cooking a delicious meal of pesto pasta, Sandy, a fellow camper, chatted with us about our trip and we shared travel experiences. 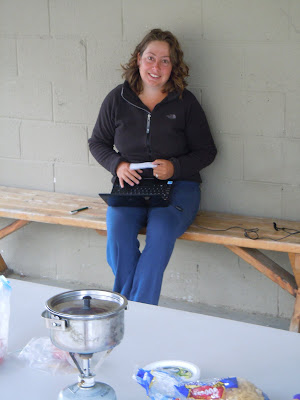 Jenny uploads pictures for the blog while Brett cooks.
By the time we had eaten, packed up camp, and uploaded a bunch of photos to the blog, it was no longer morning. When we spotted two loaded down bikers on the road heading west, we really made a push to finish packing up and get on our way! 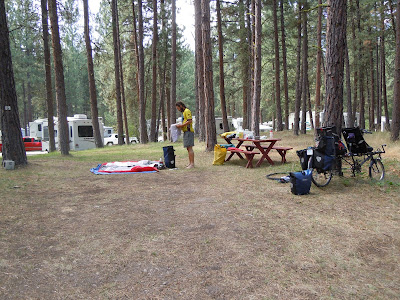 The tent is down and we're packing up! Funny how our home for the summer fits in that yellow bag.
We were going uphill as soon as we left the campground, but not steeply. Would we catch up to the bikers we saw? We figured we must be moving along at least as fast as them, and guessed we were about 15 to 20 minutes behind. Around each bend in the road we looked, hoping to catch a glimpse the cyclists. We both do so well with a challenge! At some point they would take a break and we would catch up to them. We pushed hard and though it was up, maintained an average speed over 10 mph for the first hour of our ride.

Along the way up, we only stopped twice in that first hour. The first time was almost right away, when we spotted a beaver paddling around in the water right by the side of the road! Another animal to add to our long list for the trip. Traveling by bike is so great for seeing wildlife. The other stop was to talk with a pair of men cycling from their home in Oregon to Missoula. They were nice, and their wives were driving the same route so they all got to stay together each night. Neat idea, but we like our way. 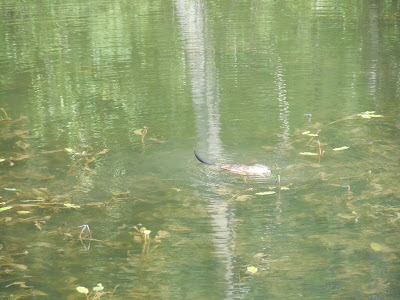 We were excited to see a beaver! So cute! 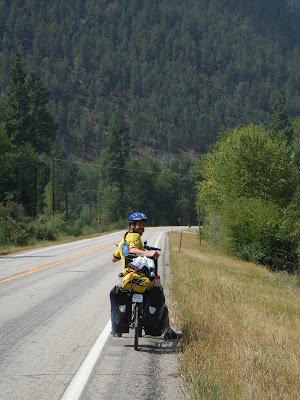 Brett never got off the bike, and was ready to go catch the others! 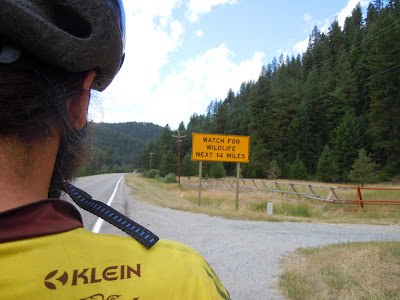 We never seem to see any wildlife after these signs. What wildlife?
Just when we started wondering if we would catch the two we saw going uphill, we spotted them taking a snack break in a pull-off! It turns out that Bob and Linda are riding from Chicago to Eugene. We all hit it off right away, and shared lots of cyclist experiences (like odd tan lines and traffic complaints). 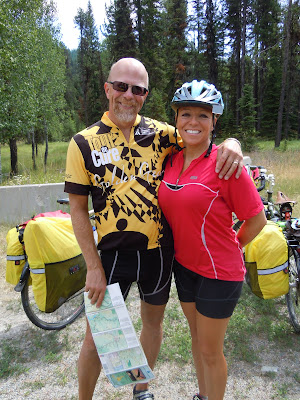 Bob and Linda.
When we all started up again, they were a bit faster and pulled ahead, but we really wanted to stick with them. We were in good form, and it felt so exhilarating to push hard up the mountain pass! It was starting to get a little steeper, and it was hard work. Little by little we gained on them, and finally even passed them. Bob yelled to us in good fun on the way by, “You set the pace, Massachusetts boy!” 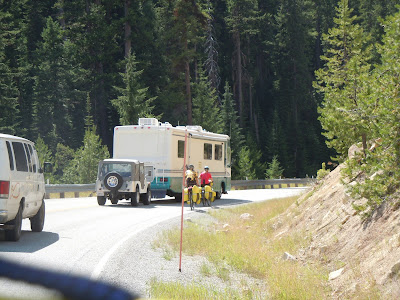 Bob and Linda share the road with a large RV with a Jeep in tow. 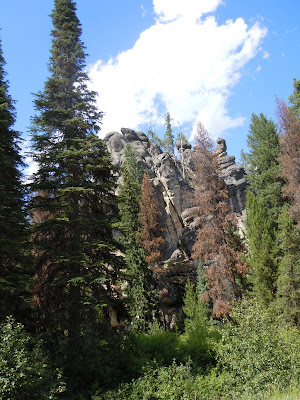 Just because we were pushing hard doesn't mean we didn't take in the beautiful rocky landscape around us.
Then the grade got a little steeper. It was about four miles of 6% grade up to the top, and we really didn't let up that much. It was hard, hard, work to keep that pace, and we were huffing and puffing. To keep our cadence and to distract ourselves a bit we sang a couple songs, even though there were some awkward pauses to just concentrate on breathing.

We all made it to the top within a minute or two of each other, and we were whooping and hollering in excitement! The top marked our last mountain pass, as well as our last time zone change, and a new state to boot! Idaho! We had made it out of Montana, a state we'd been in for quite a while. 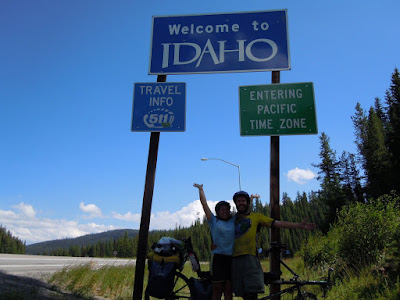 WooHoo!!!! With an elevation of 5233 ft. it must be all downhill to the Pacific Ocean, right? 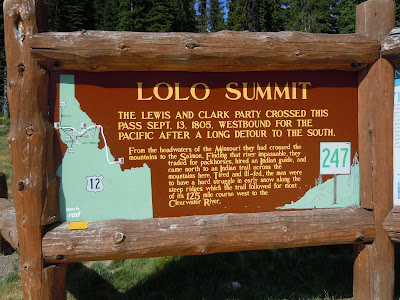 We're still following the path of some of the Lewis and Clark expedition. Pretty neat to think about some of that.
After lots of pictures at the signs with Bob and Linda, we made our way to a nice shelter to crack open our much-anticipated treat: watermelon! It was so good. We were hungrier than a watermelon could satisfy, so we cooked a nice concoction of sausage, broccoli, carrot, and pesto over egg noodles. Pesto was such a great idea! 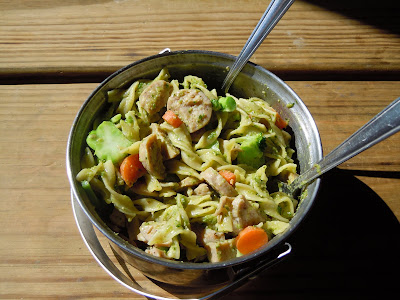 Food always tastes better atop a mountain, but this was pretty good anyway!
The rest of the day was all downhill. We coasted down the Idaho side of the pass, enjoying the fruits of our labor, and checking out the views from a few of the pull-offs. At one, a man in a truck stopped and gave us some of his new product on the market: freeze-dried eggs perfect for camp cooking! Thanks Tom! 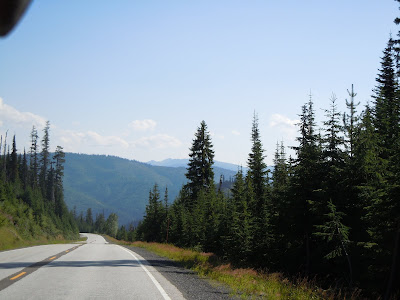 A shot of the downhill to come. 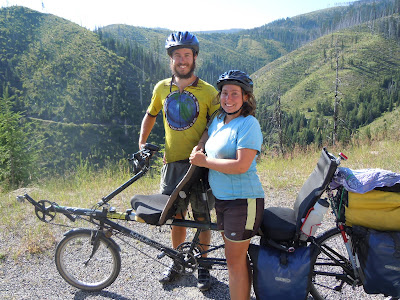 Thanks to the ranger for this great shot of the two of us together.
Some of the informational signs were about forest fires, and we even spoke to a ranger on watch for fires. We've been singing a song about forest fire in Montana recently: Cold Missouri Waters. We know the version by Cry Cry Cry, but it's written by James Keelaghan. We knew all the words and only had to look up a few. 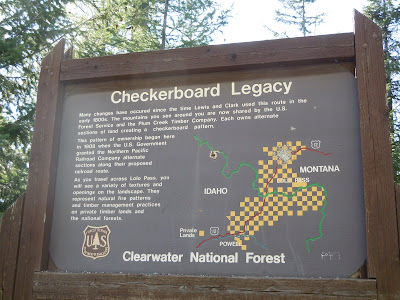 Another informational sign, this time about the interesting ownership pattern of the forest land here. The yellow is private land and the brown is National Forest property.
Coasting down to the campground was fun. Bob and Linda were staying in the cabins, and the campsite we were at was very quiet. There were a few other bicyclists around, too, heading the other direction. One of them continued on up the mountain as we got there, and three others stayed the night nearby. It's so much fun to see so many cyclists all of sudden in the last few days. 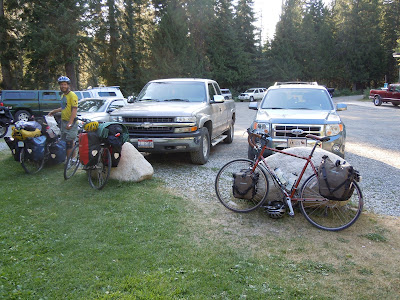 We fit right in with the other bikes on the road, but we haven't seen any other tandem recumbents yet.
For dinner Brett cooked up a package of the eggs with salami and cheese in it. It was pretty rich, but pretty good! Adventure Egg makes a decent product, and we liked that it didn't have anything but eggs in it.

Today we topped 3,000 miles. That is an accomplishment in itself, just to have kept going long enough to cover such a distance.
Posted by Jenny at Sunday, August 08, 2010