After two days of rest, we were eager to start early. Waking up at 5:56 and getting up at 6:15 helped. So did the shower. By the time we got out of the shower, Lowell had teff ready to eat, and Brett made a yummy concoction of eggs and cheese. Jenny also had the last of the blueberry pie. Not dawdling too much, we were able to pack up and head down the driveway at 8:06. Finally, another early start! 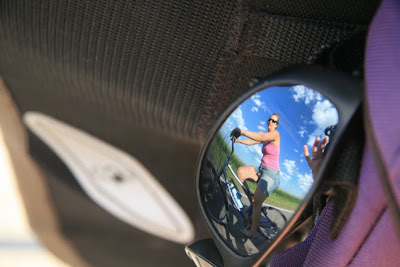 Thanks for riding with us, Selena. We love you!
From that point, it got a little more hilly, but only rolling hills, and the riding was really kind of fun. Even more fun was that we had a TAILWIND! Heading west across the country, we don't expect many tailwinds, and we never know how long they'll last, but we enjoyed this one thoroughly.

We were sad about the loss of our camera, however. It meant that when we'd see something along the way that we would usually photograph, we would just get a little sad and tell each other that we'd get a camera later that day in Fergus Falls, MN.

We received a call from a tenant today. The refrigerator in the upstairs apartment in Florence wasn't working. We weren't sure whether to buy a new one or try to get this one fixed. It was Saturday, and when we called our favorite handyman he said he wouldn't have time until Tuesday. He did give us a suggestion of a possible self-fix. We relayed the instructions to our patient and helpful tenants, who agreed to give it a try. We hoped that would work and agreed to check in that evening or the next morning. It was tougher to relax into the riding after that, because parts of our minds were on that issue.

Our average speed just kept climbing all day! The wind was really helping us, and we felt so good to be riding again. When we made it to Fergus Falls, we found a little cafe to get some lunch. They also had Internet! It was exciting and inspiring to read an email from Sarabeth, our friend in Ithaca, NY who we stayed with on days 7-9 of our trip. She wrote about a week-long bike trip she took with her younger son, Jem. It sounded like such a fun little adventure and her writing made us smile. 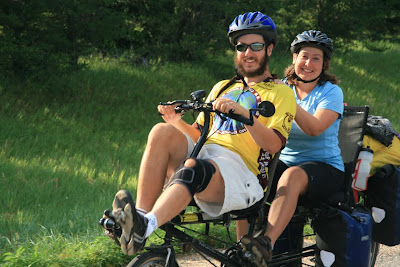 A nice picture of us smiling in the morning.
Before we left, Jenny asked someone at the cafe where we might be able to buy a new camera, and we found out we had a couple choices, both on our way west. A few miles out of town we came to a Target. We looked at their selection of cameras, but didn't find one that we wanted. Next we tried the Walmart. Unfortunately, they had even less of a selection. We weren't sure what to do. Should we buy a camera that we didn't really want? Should we wait for the next town and see if they had a better selection?

While we tried to figure out what we wanted to do about the camera, the storm that had been brewing for the last few hours finally hit. The skies were so dark and it rained and rained. We decided to stay in Walmart and do some shopping. One of the employees even said it was okay for us to leave our bike undercover in the entrance. We got some toothbrushes, bread and fruit, and decided to wait on the camera, hoping that the next town would have what we wanted.

The storm, which dropped hail somewhere to the west of us) was mostly passed when we ventured back outside. It was still drizzling and the sky still looked very dark. Not sure if we should ride or not, we looked at the map. While we were getting ready to leave, a nice man named Leon came over to us and gave us information about the weather. He confirmed what we guessed: the storm was mostly done. He also called a friend and asked about the road to Wahpeton. They were going to close it for construction soon, but it wasn't closed yet.

With the wind still at our backs, we set out again after our long break. Feeling lucky that we avoided the storm, we were in good moods. The roads past Fergus Falls were some of the straightest and flattest roads we've ever ridden on. Looking forward, we felt as though we could see for miles! Cruising at a steady 20 miles per hour helped us toward our goal of making it the last 25 miles out of Minnesota!

Those last miles sped by, even though we were getting tired. We reached an intersection and remembered Lowell's directions to the campground just across the Red River: “Look for the big catfish. You can't miss it.” We turned north on the Route 210 Bypass, which quickly turned west across the river. After a very small bridge and no ceremony or welcome signs, we were in North Dakota! And lo! There was a humongous catfish that we indeed couldn't miss.

We turned into the small campground marked by the large fish. We were quite tired, still frustrated about the camera situation, but elated to have biked our longest day yet: 77.8 miles! Just as we were about to record the statistics from the bike computer, the display went berserk. Brett held it in his hand and it said it said we were going 48 mph! We hoped it would be back to normal in the morning.

Dinner was rice with spinach/feta sausage, zucchini, garlic, and spices. We ate in the tent, because by the time we finished cooking the mosquitoes were getting thick. It took all that we had left in us after that to wash the dishes and fall asleep, despite the kind offer by our neighbors to share their fire. 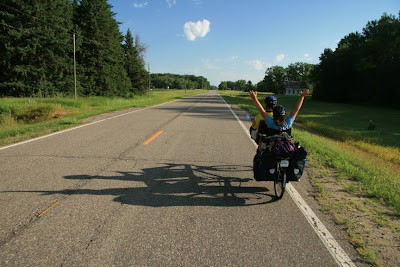 We keep pedaling on, and today we made it to North Dakota!
Posted by Jenny at Saturday, July 17, 2010