We woke up to a green world, a nice change from our past couple of days in the brown, hot dessert. Timmy had some little red potatoes that he'd bought at a farm stand yesterday, and we cooked those up with the canned chicken we had and some curry spice. The result was a delicious potato, chicken curry soup! It was great to come up with a new meal after so long on the road. 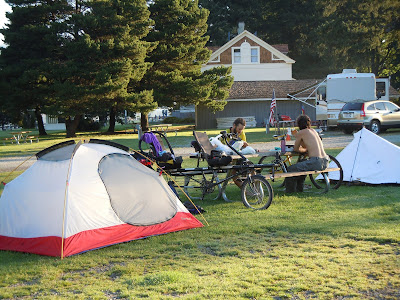 Timmy and Brett getting ready to eat some breakfast.
Timmy's legs were pretty sore from all the biking he did the day before, and from the hiking he did a few days before that. Jenny gave him some ibuprofen and that helped a lot. He had climbed up some pretty large hills his first day out and biked about 40 miles!

Leaving the campground, we didn't have to get back on the highway. We took a bike path for a while, and it was so shady and cool! What a difference from the exposed highway. There were lots of ripe blackberries to be picked, which was a lot of fun. Timmy had biked this route on his way yesterday, so he knew which way to go and we had a blast talking and biking together all morning. The small shady roads and bike paths were relaxing and beautiful. This was what we had pictured when we thought about biking in the Columbia River Gorge! 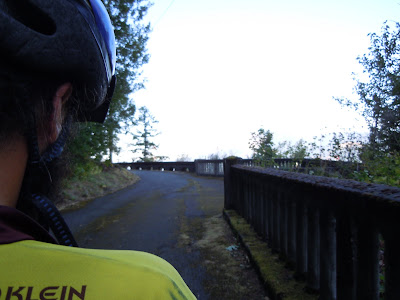 This photo shows the narrow old highway, built sometime around 1915. Much of it has been maintained, but there are several sections where no cars are allowed. We loved the railings with a little character, the quiet, and of course the views! 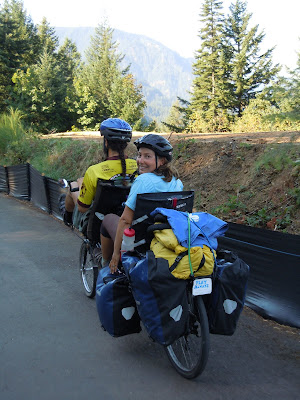 It's fun to have some pictures of both of us on the bike! Yay for Timmy visiting and taking pictures! 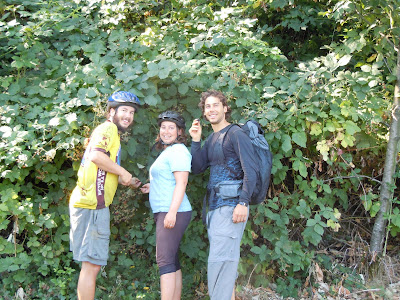 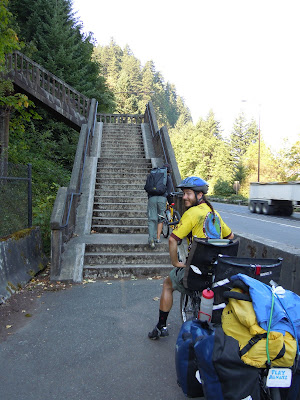 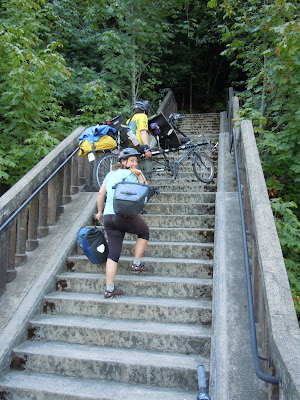 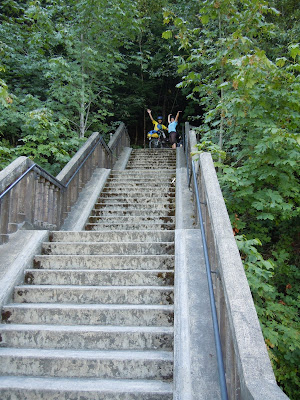 We made it to the top!

When we got to the waterfalls the gorge is famous for, we stopped to take lots of pictures. Timmy was kind enough to stay down below at Multnomah Falls so that he could get a photo of us on the bridge. Thanks Timmy! 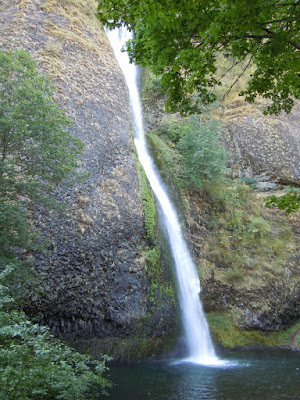 This was one of the first waterfalls we came to. Beautiful! 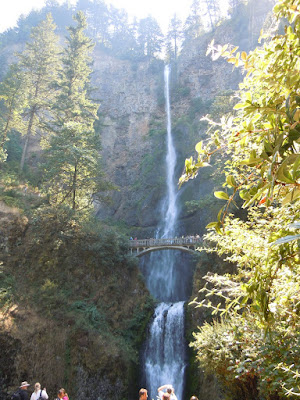 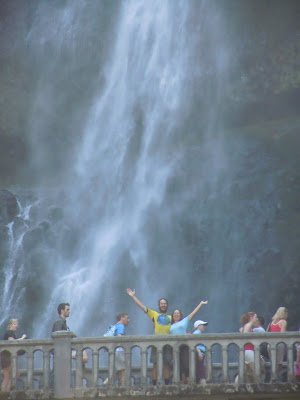 The upper falls is 542 ft. high and the lower falls is 69 ft. high. Together, Multnomah Falls is the second highest year round waterfall in the United States. Nearly two million people each year come to look at it!
Jenny had the brilliant idea to ask for bike maps at the Multnomah Falls information shop. It took them a minute to locate, but then we had a cool guide to biking in the Gorge. It shows elevations of different routes you can take through the valley on a single chart for comparison. We quickly noted the point at which the scenic route started climbing significantly, and made plans to go only as far as that before getting on the highway for the last stretch into Portland. 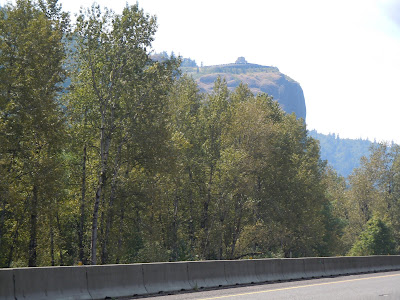 Can you see that pointy spot on top of the cliff? That is where we would have been if we hadn't decided to take the highway. We thought the view was very nice from below.
The miles pretty much flew by on the highway. Timmy set a good pace, and we all pushed pretty hard to be done with the noisy route. Soon enough, we got off and found a path that the bike shop we were headed for recommended. It took a long time to make our way into the city, however. In a way, that's a testament to how thorough the bike routes and paths are in the Portland area because they extend far beyond the downtown streets. 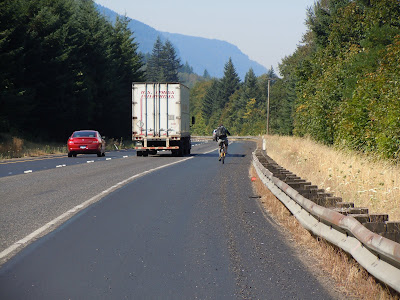 Timmy races a big truck.
We were VERY impressed with the way everything was labeled for bicyclists on the paths. For instance, at intersections, they mark how far in miles and minutes it is to certain destinations along the different paths. Some of the route we took was pretty much right alongside Interstate 5, and it was fun so see traffic in a holding pattern while we pedaled away. By this time, we were pretty darn tired, and try as we might we kept getting slower and slower, and there were plenty of hills to climb. 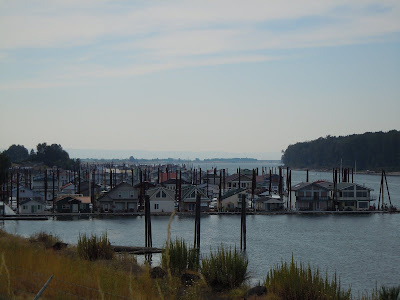 Houseboats on the outskirts of Portland. It's very different to see stuff like this compared with the dry, dry, dry parts of Washington and Montana.
As we made our way off the paths and back onto roads, we knew we were getting closer. We stopped at a Whole Foods store for some yummy chicken, a few drinks, and another snack or two. That helped our spirits and our bodies. In a few more minutes, we reached the bike shop that specializes in recumbent bicycles but works on all kinds.

We made it into the shop with 45 minutes for them to work on our bike. The repair guy asked us what the priorities were. Brett told him the steering column was the biggest thing, but also the timing chain that had fallen off four or five times just today. The steering column had two possible replacement parts: the equivalent RANS part that had been there in the first place, or a different make that is more expensive but doesn't wear out the same way. We went with the cheaper RANS part. Adjusting the tension on the timing chain came down to simply moving the tensioner around, but they mentioned that our whole drive train is pretty well shot, and should be replaced. It'll work okay to the end of our trip, but it's just too worn to really give it a proper tune-up anymore. 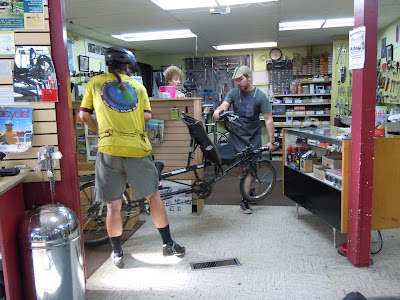 Our bike, about to get looked at.
After leaving the bike shop, the three of us set out to find Brett's friend's Eddie and his wife Beverly, who we would be spending the night with. Eddie was Brett's Scrabble Club Director, years ago when they both lived in New Hampshire. About four years ago Eddie and his wife moved out to Portland.

The address that Brett had for Eddie's work space in the city, where we planned to meet them and leave our bikes, turned out to be west from the bike shop. It took us a while to bike there, because we were tired and there were some hills in the way. When we arrived at the spot where the address should be, we couldn't find it. A phone call to Eddie revealed that their work space was actually a good deal east of the bike shop. Oh no! When Brett told the other two the news, both Jenny and Timmy said in unison: “But, we don't WANT to bike all the way back there!”

Tired as we were, we did end up biking back through the city, passed Whole Foods again and did find Eddie and Beverly. It was quite the feat to get our bike up the stairs and around the corner into the room we would keep it in that night. 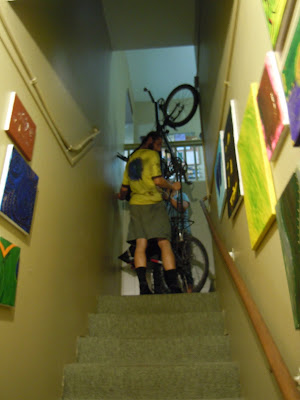 We had to maneuver the bike very carefully up these stairs. We took it slow and together we got it all the way up. Teamwork!
The four of us had a tasty dinner at a Lebanese restaurant just around the corner before we got in the car and drove out of the city to Eddie and Beverly's house. We were all very tired. What a change to be in such a large city after a day of biking in the woods and looking a waterfalls! After showers, we went to bed, Brett and Jenny in the guest room and Timmy on the couch in the living room. Thank goodness for friends welcoming us into their home. It sure feels good to be inside in a warm house, sometimes.
Posted by Jenny at Tuesday, August 17, 2010