Last night, Brett specifically tried to give Jenny the mattress without the small hole in it, so that she might have a full night of sleep, but he failed. In his defense, it is very difficult to tell them apart. The leak is very slight, not even noticeable actually, until you wake up on the ground in the middle of the night.

Despite the rough night for one of us, we both got up feeling pretty good. We had fun taking pictures of each other climbing around on redwood tree stumps next to our campsite. These trees really are amazing, and the stumps left behind are quite something. Ken, a fellow touring cyclist, took a shot or two of us together, for which we are grateful. He's heading home to San Francisco, on almost the same time frame we are, so we may see him again. 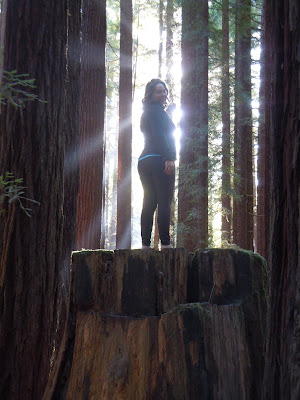 A shot of Jenny on the stump in the morning sunlight filtering down through the trees. 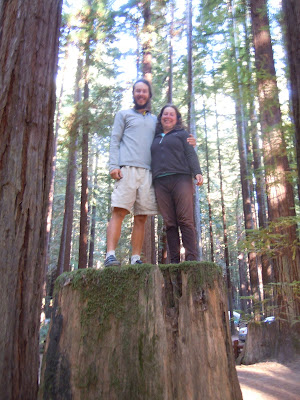 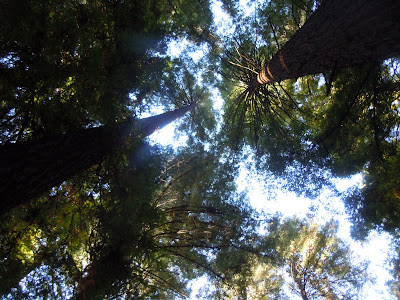 WOW.
We tried to get going on the earlier side of things this morning, and we succeeded in being out on the road by 9:40. Not too bad! We were still riding in the redwoods, and it was just BEAUTIFUL. It's a little surreal, but mostly just awe-inspiring and serene. The temperature was a bit chilly, but there was no sign of wind, at least not yet. 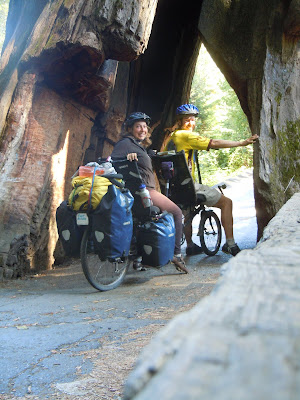 Out of curiosity and because we could, we paid $3 to be able to ride our bike *through* a redwood tree. It's living, but has some help staying upright. It wasn't the most elegant thing, but it was neat and awe-inspiring in its own way.
The riding seemed to be more down than up for a while. We had two fellow riders in sight this morning: Ken behind us, and an unladen woman from British Columbia (who has done a bunch of touring by bicycle in the past) with whom we played leapfrog. At one small store we all paused together, but Ken didn't need anything and kept on and the woman turned back since she was just out for a day ride. We bought two drinks, a treat, and floss (which we've been meaning to buy since Florence or before).

Leaving the store we noticed how hot it was. We realized we aren't right along the ocean anymore, with its chilly breezes to cool us down. In some ways we welcomed the break, but it was pretty hot and we miss the ocean views. Thankfully, we're often along a river so there's water to gaze at.

Lunch today was a feast of our own supplies. We stopped in Garberville and got a few things from Chitaqua Natural Foods, but mostly we sat in the park/square across the street at a table with a sunshade and munched on things like the free tomato from yesterday, good bread (made in Arcata), a delicious lemon poppyseed muffin, salami, ham, lettuce, hummus, carrot, and avocado. When we'd eaten to our heart's content, we packed up and reluctantly made our way back onto the highway in the hot sun. 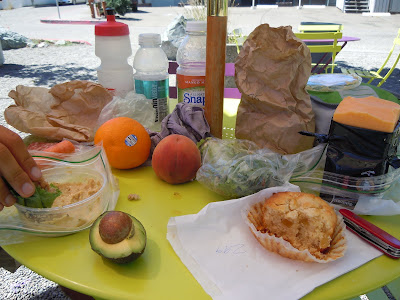 Our food supply laid out for the feast!
We considered taking a break in a cool place like a library, but we wanted to keep going. We paused at the on ramp to apply sunscreen for the open road, and then on we went. Actually, there was a nice breeze helping us along, and after a bit we got off at the next exit. Following the smaller road in the same direction at the highway, we were right alongside the river, and we came upon a good spot to go swimming! 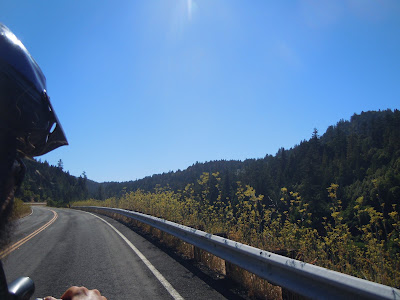 A view over Brett's shoulder of the river valley we followed much of today. Along the road were lots of what looked, and smelled like huge fennel plants!
The cool to cold water was really nice, but the algae was less so. We swam a bit, and lingered a bit, but we cooled off quickly, and still wanted to make some distance today. Carefully avoiding the poison oak that abounds here, we made our way back up the steep incline to our waiting bike. 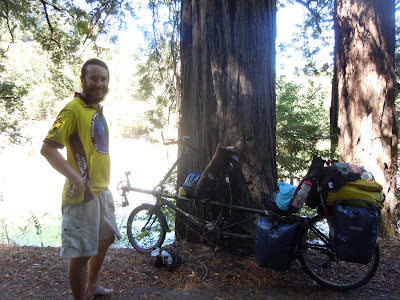 A barefoot Brett ready to climb down to the river for a swim.
After that, we were biking for a while. Of course, we warmed back up again quickly, but we were on and off the highway a bunch this afternoon, so the riding was interesting enough to keep our minds occupied. We did more climbing this afternoon, gaining a few hundred feet of elevation, something we haven't done in a while. Looking ahead, we know we'll have a difficult day of climbing tomorrow (our last big hillclimb/mountain), and we're really excited for it! 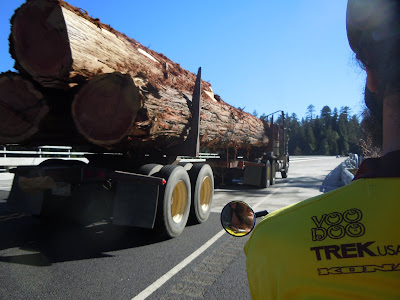 We passed a few logging trucks today, or rather, they passed us.
Our supply of water ran low this afternoon. We were drinking lots to keep up with the heat, and there aren't so many stores (or houses) in this region, so we actually ran out for one of the few times all trip. Just as we ran out though, we came upon a campground/resort/camp store where we bought a treat, and refilled our water bottles with nice cool water.

From there, we only had 5.2 miles to go for the day to Standish-Hickey State Park. It was eerily quiet, with an otherwise empty hiker-biker area, and only one other couple in the section of the campground we were in. We self-registered, and Jenny cooked us up a huge meal of rice, beans, apple sausage, cheese, green beans (from the farm stand!), while Brett set up the tent for the night. Brett also made sure to charge the laptop and camera from the outlets on the bathroom building.

Since we finished our day of riding early enough, we even had some time and energy to work on the blog a bit. Brett wrote some, but we're so far behind it's hard to remember details from the day. The pictures we took help set the story straight, plus Jenny remembered more of the day, and we pieced it all together.

After that, we set an alarm for an early start, and got some well-earned sleep.
Posted by Jenny at Wednesday, September 01, 2010