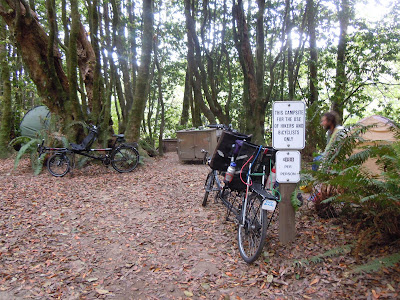 Good morning! Two tandem bicycles in the hiker/biker area!
After breakfast this morning, before we hit the road, we offered Nadia and Dieter a chance to try our tandem in exchange for us trying theirs. They were excited to try the switch for a ride around the campground loop, and we were thrilled with our chance to try their bike. We should explain that on the Hase Pino, the front person is in a recumbent position while the rear person is in an upright position. Brett took the rear position, which is also the captain's seat on this bike, while Jenny got to be up front. 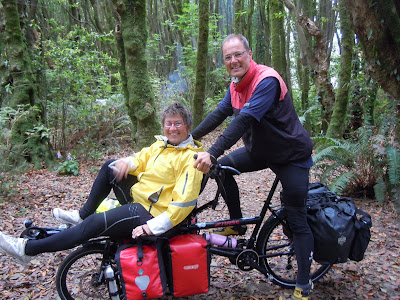 Nadia and Dieter and their very cool bike!
It was hard to tell if we liked it more than our own RANS Screamer, but we certainly enjoyed the chance to try it! Getting going was a little different, and it had been a while since Brett had swung his leg over an upright seat. Funny the things you get used to. We are so used to our bike now that probably any other bike will feel strange. We're going to miss getting on this bike every morning when we get home in less than a week, even though we are fairly well ready for the trip to be over. 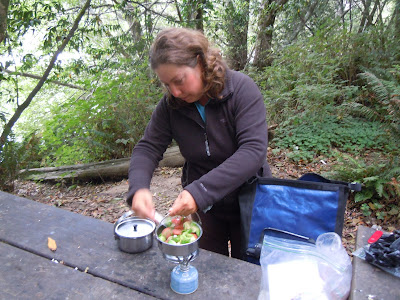 Jenny cooks up some breakfast to get us ready for a long day. 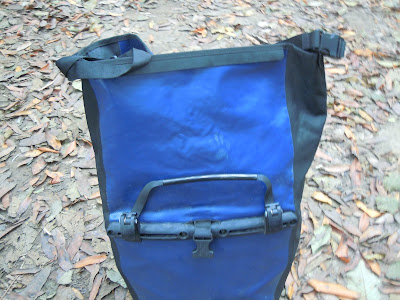 Who's paw print is that?? Pesky raccoons! (Also, someone nibbled their way into our food bag last night, even though it was locked in the wooden cabinet. Oh well, it's just a small hole and the trip is almost over.)
We pedaled out of the campground on our own bike only a few minutes before our fellow tandem riders left on theirs. By the time we'd made it back up the hill and back on the main road, Nadia and Dieter were close behind us, and it stayed that way for most of the morning ride. Having bikers behind us kept us pushing and it was a fun challenge to stay ahead. The four of us played leap frog a couple of times, always smiling, or ringing the bell playfully when we passed each other.

We had planned for a long day today. We wanted to get as far as we were able, so that we would have as few miles into San Fransisco tomorrow as possible. We still hadn't arranged the exact details of shipping our bike, though we were pretty sure it would work out. That was on our list of things to do today.

The terrain was still up and down, and the foggy morning made for some pretty sights, but not of the ocean, though we knew it was nearby. There were hawks in the sky again this morning, too. After one downhill, we stopped at a small store in a small town and ended up choosing to buy some hot dogs after not seeing too much else we wanted in there. Nadia and Dieter were there, too, as well as several other bicyclists, some touring and some not. All the bikers were really nice, and people were impressed with our distance covered this summer. The bikers out for the day had purchased water, and after they filled their bottles as much as possible, they gave us what was left, which was really kind of them. 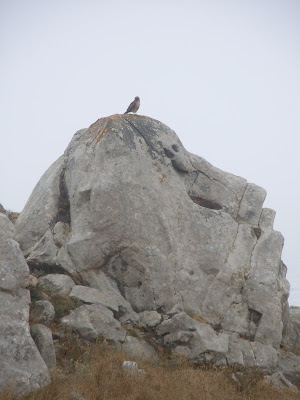 Again we were impressed with the hawks, both flying and perching on these rocks. 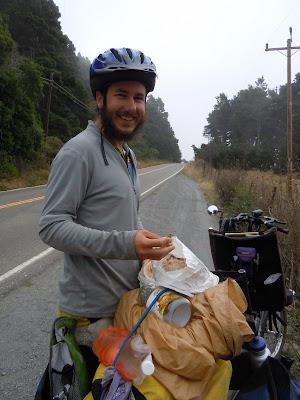 A happy snack on a foggy morning.
Sometimes the Adventure Cycling maps are great, giving us phone numbers of campgrounds or listing where there will be stores, and sometimes they have mistakes or imperfections. We were looking at the elevation profile and thought we were done with the big hills, based on the towns we'd reached and passed, but were extremely disgruntled to find ourselves climbing one last big hill, misplaced on the elevation profile. Grrr! It was really foggy on the hill, but eventually we got to go down the other side. Nadia and Dieter passed us one more time just after that, and stopped for the night at a campground where several other touring bicyclists were staying. 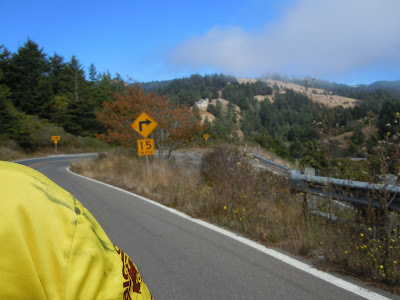 A switchback on the way down the misplaced hill. 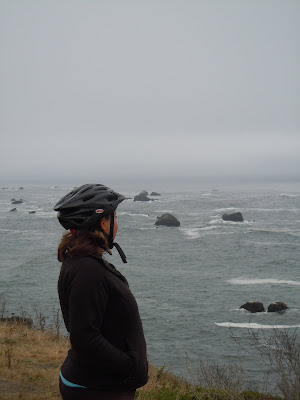 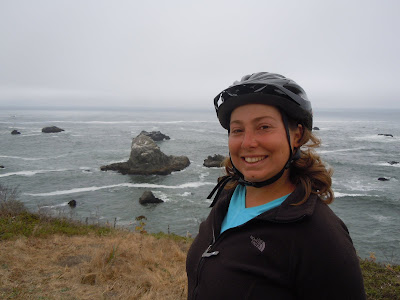 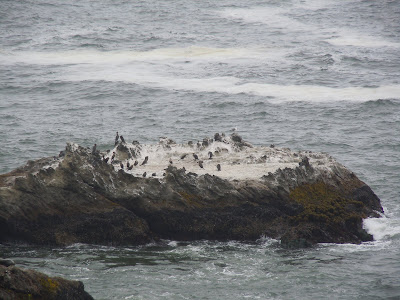 Soaking up all the views of the Pacific Ocean we can, as we'll only see it for one more day.
We were hungry, and a bit tired, but it was still only late afternoon, and we really wanted to get to San Francisco early in the day tomorrow, so we pushed on. It was very tempting to stop with everyone else just north of Bodega Bay at a state campground, but once the choice had been made, and we had passed the campground by, there was no turning back (at least in our minds).

When we made it into Bodega Bay, we wanted very much to find a bathroom. The town was touristy, with mostly upscale shops, and not one seemed to have a bathroom for us to use. Finally, we realized we were hungry too, as it was about time for an early dinner (5pm). We picked a tourist dive, a fish 'n chips place, and they had a bathroom. It took a long time to get our food, but that was okay because it took us a while to find a table free, too.

Before the food came, Brett called Mike's Bikes in San Francisco to see if they had bike boxes that we could use to ship our bike. We figured we could cobble two cardboard bike boxes together to make one large package to fit the Screamer. He came back to the table so proud that he'd called and found secured two boxes, but Jenny reminded him that we needed more than just boxes. We need a business to say they will be the pick-up point for the shipping company. After much tired and hungry grumbling, Brett called back and spoke to another person at Mike's Bikes and found out that, yes, they are okay with being the pick-up point, and figured out their hours for the Labor Day weekend we are in. Whew!

Our food was decent, and it filled us up, but we were almost buoyed as much by taking care of the shipping logistics. It was as if a weight had been lifted from our shoulders and a dark cloud passed away, allowing us to enjoy our trip again. We were adventurers with miles to ride, and though we'd passed the last camping spot (or accommodations of any kind) for about 35 miles, we were excited and optimistic about our chances for making it to the next state park, or the private place a few miles closer.

A mile or two south of Bodega Bay, we turned East, away from the ocean...and uphill. It was only a gradual climb, and the scenery was interesting and different. We saw sheep fields, and eucalyptus trees lined the roadsides. Eight miles out from Bodega Bay we reached Valley Ford (pop. 126), which had a great general store that we stopped into. We bought the rest of a homemade pecan pie, plus some strawberries and some juice. Mostly we were excited about the pie, though! 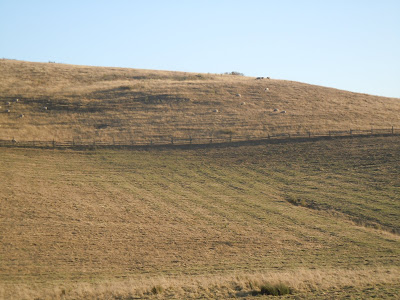 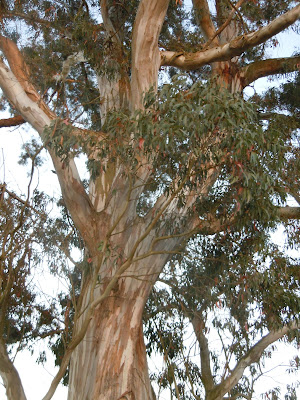 Eucalyptus tree.
Shortly after that, we turned back south and crossed our last county line short of the Golden Gate Bridge, entering Marin County. It was getting dusky, but there was nothing to do but pedal onwards. On the first uphill in Marin County, our spirits deflated some with the realization that our rear tire had just deflated as well. Darn! A nasty little tack like the kind used for furniture was the culprit, but now we were forced to unload the bike, flip it over, take off the rear wheel, and find out that we had no extra tubes for that wheel besides the ones that already had holes. So, we had to patch this tube as well.

All of that took so long, even working quickly, that it was actually dark by the time we finished. We had to put the wheel back on with our headlamps shining. It was getting chilly, too, so we layered up. We still had some good energy left for pedaling, and we had no choices no but to push on, so we kept going. Brett was afraid that the bike's headlight battery would die if we used it all the time, so we kept it on the lowest setting and even turned it off when we could avoid using it. But still, we were making progress.

After the flat tire, we started thinking about stealth camping. Although neither of us was ready to stop, we both began scanning the sides of the road for possible spots. We descended back to ocean level and passed by a single building all lit up. It must have been a restaurant or something, and even though it was seemingly in the middle of nowhere, it was bursting with activity. Luckily for us, there weren't many cars at all on the roads, though. We were under twenty miles to the next campground.

At this point, it became clear that we probably weren't going to make it to a campground. Riding in the dark is slower, and we were getting tired, so we were actively looking for a place to pitch the tent without drawing attention or complaint. Even though we were only about fifteen miles from the nearest campground when we made it to Marshall, we had had enough, and figured we had cut enough miles from tomorrow's ride to San Francisco to make it there in time to pack the bike up for shipping before the bike shop closed.

The Adventure Cycling map lists the population of Marshall as fifty people. We didn't see any of them as we picked a spot between a tall hedge protecting us from the road and an abandoned building. Our tent sat mostly level on the thick growth of ivy on the ground and we were mighty proud of our little spot! We were tired and it felt relieving to have picked a spot to stop. We were a little nervous about camping so close to the road, but we figured we'd get up early enough in the morning before anyone noticed us. We wanted to make sure we got a good start tomorrow anyway, because we still had a bunch of miles to go to get to the city. 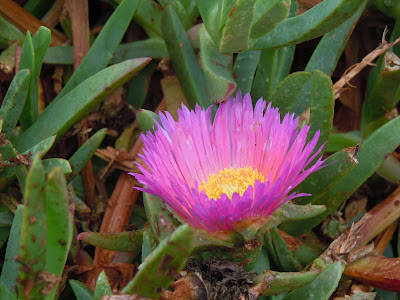 We saw a few of these really pretty flowers today before we headed inland.
Posted by Jenny at Saturday, September 04, 2010