Just after 6 a.m. Brett's alarm went off, but we were tempted to stay in bed. It was just starting to get light outside the parts of us that really wanted to get a nice early start to the day, (knowing that we had some of our last large climbs to conquer) persuaded the other parts of us to get up. With a quick game of “Race you out of the tent!” (which always seems to take longer than it ought to because of the inevitable involvement of tickling, hiding the other's clothes, or covering one person with all of the blankets while trying to dash out of the tent with someone holding tightly to one of your legs) we were fed and on the road by 7:10!

The morning was quiet and cool as we set off excitedly. Our breakfast of cereal with coconut milk and peach on top, oatmeal and other snacks put us in a good mood for biking. Also, it's always exciting to get an early start to the day.

Only a few miles (fifteen minutes) into our day, we turned off of Route 101, which we had followed down most of the coast, to pick up “The One”. Around here, they don't call these highways by anything other than “The One,” or “The One-Oh-One.” It took Brett a while to notice, and today we joked around a lot, overusing the names that feel silly to us. Besides getting through the last few miles and over the Golden Gate Bridge into San Francisco, “The One” is pretty much our last road to follow! 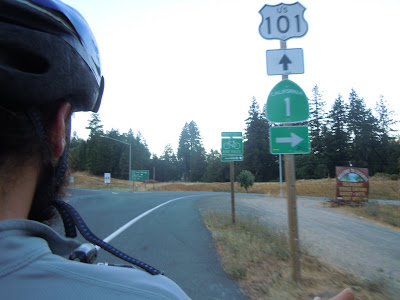 About to turn onto The One!
When we turned onto The One, we had a nice little downhill to a river where we started our last big climb. The sun wasn't yet reaching down into the valley, but the climbing warmed us up quickly. The road was quiet, and there were almost no houses anywhere, just lots and lots of trees. Most of the time, we were able to see down into or across the valley we were leaving behind, and they were really neat views. 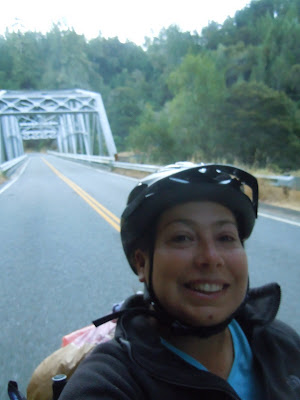 A different shot, looking back at the bridge we just crossed, at the bottom of the hill. 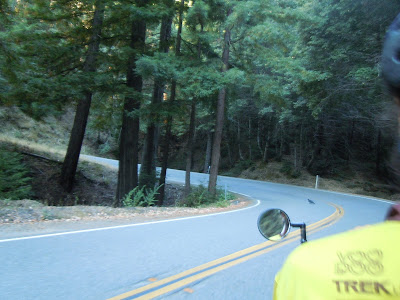 Now we get to go up! 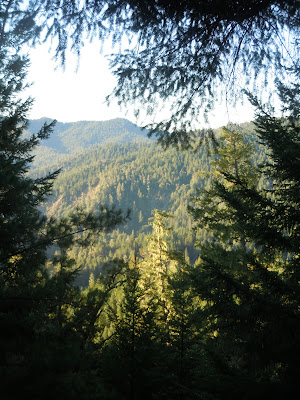 A lovely view after about a half hour of climbing. 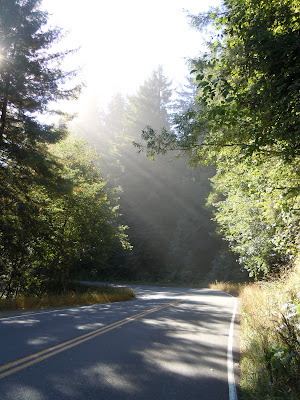 The roads were so quiet this morning. 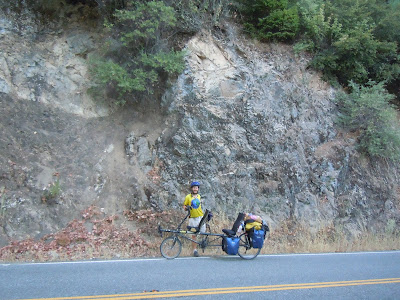 Brett stretches while Jenny takes pictures.
We climbed for about an hour straight, going 4.5 miles and gaining about a thousand feet of elevation. You do the math: we didn't go fast. We counted how many cars we saw, and it wasn't hard to keep track: one car passed us from behind, and somewhere around a dozen went the opposite way. We were still in good moods, and just after what turned out to be the top, we stopped for a snack. After that break in which we ate a delicious combo of dried salmon and bread and hummus, our moods got even higher. Man! That snack was GOOD.

Of course, after every big climb there is a big descent! This one was REALLY fun, especially for the driver. There were about a million switchbacks on the way down, and it was fun to use the brakes (thank goodness for the drum brake!) just enough to be safe, but to be able to cruise around all the corners (sometimes making “Nnneeeeeowwwhhhh” airplane/racecar noises).

It's like we're flying!
At the bottom of the the mountain, we had a short level stretch before starting to climb again. This accent was about 2 miles up and took us about half an hour to gain about 500 feet of elevation. It wasn't as fun, but we knew it was coming, and it was over before too long.

We came back down the other side of that hill just about all the way to sea level for the first time in a few days. In the first town we came to, Westport, we stopped in a little general store and then ate again. All that climbing takes time and makes you hungry! We used the wifi there to check our email, too. 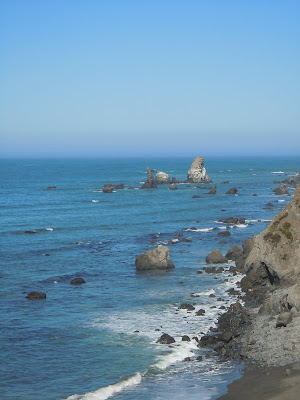 Cliffs and rocks and water and beautiful blue sky. 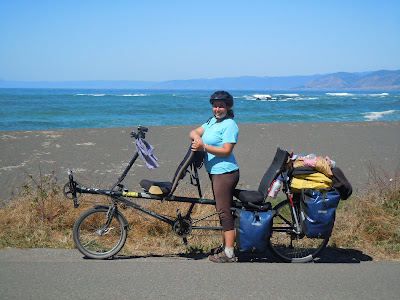 It's nice to be riding along the ocean again.
Heading out of Westport, we had some steep little ups and downs, but we won't top 500 feet above sea level more than twice again this trip. Weird to think about it that way, but exciting, too! However, these little hills tired us out and we lost the emotional momentum we had from climbing this morning. 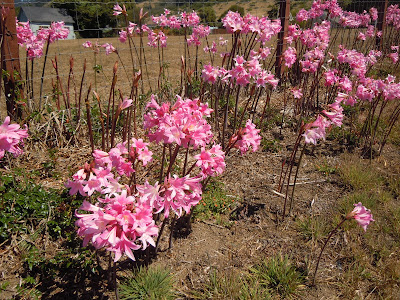 A large patch of the "funny pink flowers" that Jenny had been wanting to get a photo of ever since we started seeing them when we entered California.
The little hills began to mellow, and in Ft. Bragg, a medium sized town, we stopped for some ice cream. Just as we were sitting down to eat our banana split, a man walked into the shop, headed straight for us and said, “Hey! Do you want some?” He looked happy and excited, but we were confused as to what he wanted. “Want what?” we said, in response. “Do you want some pot? Aren't you from Maine? I saw your bike outside and, weren't you the ones I passed back there who asked if I had some pot?” All we could do was shake our heads. 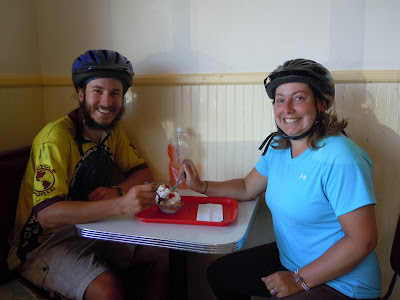 One! Two! Three! Ice cream!
Also in Ft. Bragg, we stopped at a grocery store and procured replacement stores of food: hummus, carrots, avocado, broccoli, and a peach. Sadly, not far out of town, we suffered a flat tire. It took a little while to change: unload the bike, take the rear wheel off, etc., etc. That cost us both some time and some more emotional momentum, but we did okay with it, trying to cheer ourselves back up. 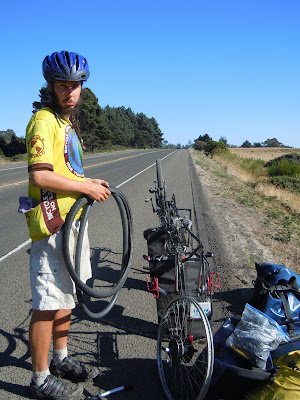 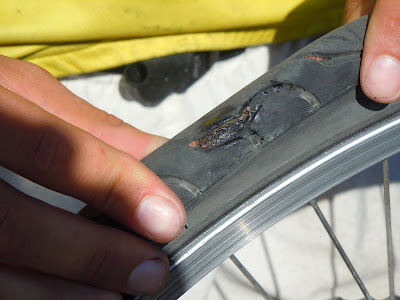 So much for that tire. Good thing we have another!
As the afternoon wore on, we made some more progress south, but we were getting tired and figured we would probably stop in Little River at Van Damme Beach State Park. However, after one tough little climb, we realized we had just left Van Damme Beach State Park at the bottom of the hill. We didn't want to have to climb that hill again, and we weren't completely wiped out yet, and it wasn't even dusk yet, so we pushed onwards.

According to our map, the next little town, Albion, has two RV parks. Unfortunately, our phones didn't get any reception to call either one, so we couldn't check prices or availability. We stopped and consulted the map multiple times, but couldn't figure out exactly where one of the RV parks was located, and the other one was located at the bottom of a cliff. We couldn't bring ourselves to just go down the hill to that park, so we crossed the bridge, and hoped there was somewhere to ask on the other side. 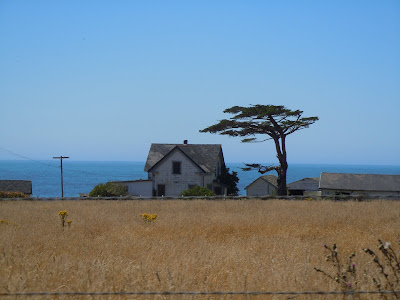 An old house and a wind-blown tree.
There were no stores to be seen that would be open after 5pm, and we stopped and talked it over. In the end, as much as we hated it, we decided we were quite tired, and it was the lesser of the evils to go down the cliff that we'd have to climb in the morning.

Back across the bridge we went, and turned into the driveway down. A sign greeted us: 14% grade! Holy smokes! We were a little nervous going down such a steep grade, but the drum brake did its job, and we went down slowly. Sadly, this RV Park wasn't that attractive. It did have a nice view of the bridge, but other than that it held nothing for us. Apparently, if you like to fish, this is a good spot to camp, though. For us, this was just a spot to lay our heads. We paid in an envelope and picked a site. Because we were tired, all this took us longer than usual, but we managed not to get too crabby despite the chill that was now upon us. 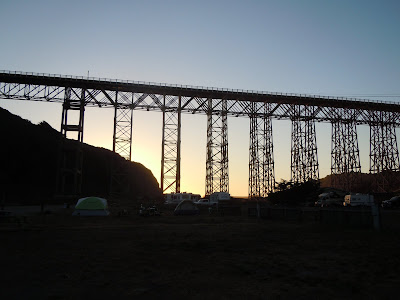 An amazing view of the wooden bridge above the campground.
Jenny was the hero of the evening because she got the password for the wifi from a neighboring camper! We cooked a meal first, before setting up our tent for the night. It wasn't much, but the broccoli-cheese-ramen with salt and cayenne did fill us up okay.

Amazingly, by the time we had the tent set up, it was dark, despite arriving while it was still quite light out. We had just enough energy left to crawl int the tent, write a post for the blog, and go to sleep. 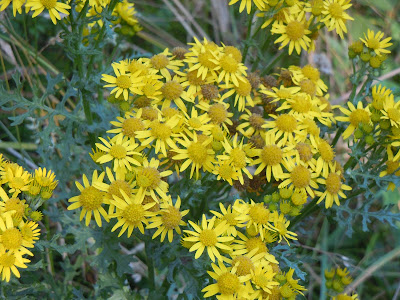 Many of our breaks while climbing today were centered around flowers.
Posted by Jenny at Thursday, September 02, 2010