Unfortunately, we didn't have the best sleep last night. The room we stayed in was too hot and the people on the bottom bunk snored. One of them also got a phone call in the middle of the night, which she answered and proceeded to talk loudly on, in Dutch, for what seemed to Jenny like an hour. The bed was comfortable though.

We got up early and breakfasted on watermelon, last night's chicken leftovers, an omelet with Laughing Cow soft cheese, onion, and garlic, plus toast. It was fun to cook food in the huge kitchen at the hostel. We made sure to wash all the dishes we dirtied afterward.

After breakfast, we were both excited and overwhelmed at plans for the rest of the day. We needed to finish sorting through what we were taking home with us and what was getting shipped with the bike, then we had to pack everything up and find our way to the bike shop. Once there, we would start the process of dismantling the bike. After that, we'd have to pack it all up securely, and get it ready for shipping. Finally, we'd have to find our way to the home of the person who offered to host us tonight. 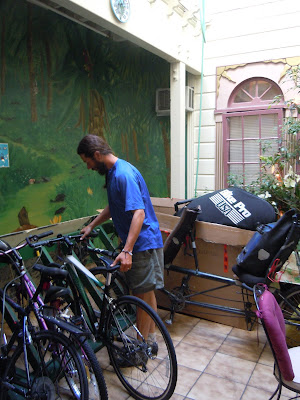 Brett works to free our bike from the little courthouse room where we kept it last night. Up and over the other bikes was the only way out.
After finalizing our plans and printing out the shipping forms at the hostel, we carried everything downstairs (it took quite a few trips), loaded up the bike one last time, and set off down the hills of San Fransisco toward the docks on the eastern edge of the city. 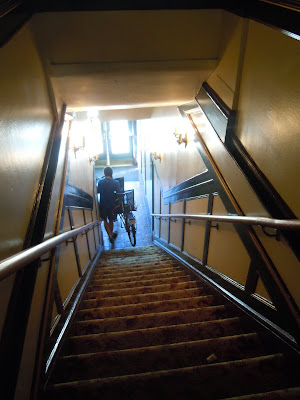 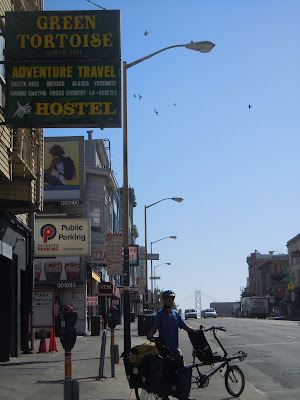 A picture outside the hostel before we set off down the hill. In the background you can see the tower of the Bay Bridge to Oakland.
Once we were riding a sense of calm came over us. This was our last day of our bike trip. And it was BEAUTIFUL. The sun was shinning, the water sparkled in the distance and we were pros at navigating traffic and finding our way around. We took our time riding the short three miles to the bike shop and stopped several times to take photos. 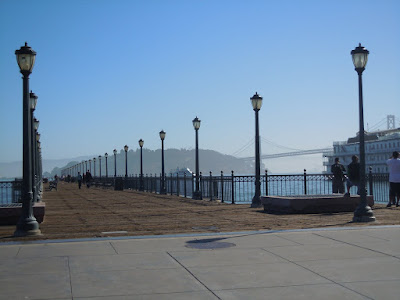 A pier down by the water. It was such a beautiful, clear day. 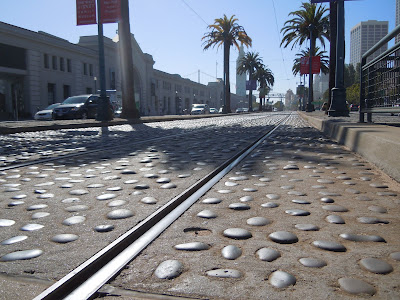 An artsy shot.
Arriving at Mike's Bikes about 15 minutes before 11 am, the shop was not yet open. We unloaded our bags and set to work taking the bike apart. Halfway apart, the bike looks really silly. Once the employees arrived for the day, we were able to get the two bike boxes that they had saved for us and they also kindly let us borrow a few tools to finish dismantling the bike. Jenny cut the boxes so that we could fit them together as one “box” with lots of packing tape she bought nearby. We were having fun, but it was a bittersweet feeling at the same time. 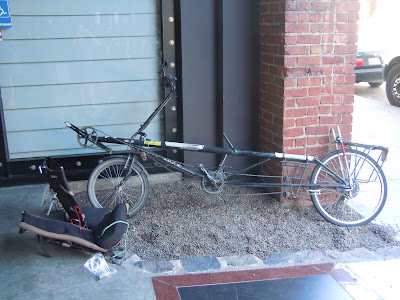 What we accomplished before the bike shop opened. 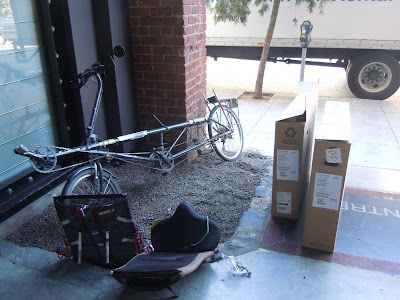 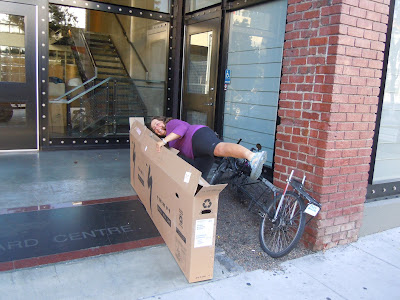 The two boxes taped together. Long enough to fit Jenny! 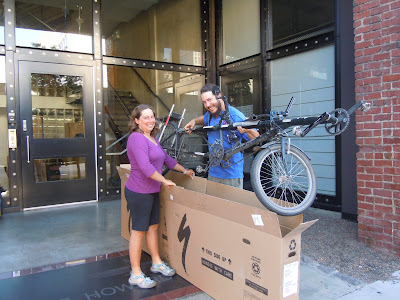 In goes the bike!

About an hour later, we were still in the midst of packing up the bike. The bike went in fairly easily once apart, but we had to figure out how to stow all our other gear in there safely. We were starting to get really hungry so Brett went to get some food while Jenny continued to pack the boxes. Getting to the very end of a trip can be pretty emotional and even stressful, so it was good to take a break from each other. Brett made some good choices at the food store just a block away, and brought back some yummy food. When he got back, we sat down together and ate until we were full. Things are always better after food, and Jenny had brought us close to the end of the packing, so we finished up pretty easily after that. 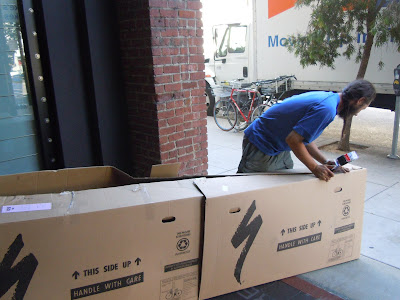 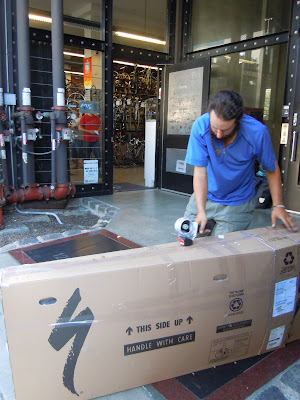 Lots and lots and lots of tape.
With one final picture of us next to the box that now held the bike that took us all the way across the country, we set off into the city on foot. After a short stop at the health food store/Internet cafe near Mike's Bikes, where we called Mama and Papa and looked up directions to our Warm Shower host for the evening, we set out again. Lindsey's house was only a few miles from where we were and though we were tired and feeling sick of traveling, it was a nice change to walk there. Now that our bike was packed and left behind, we mostly just wanted to be home and not be so tired. 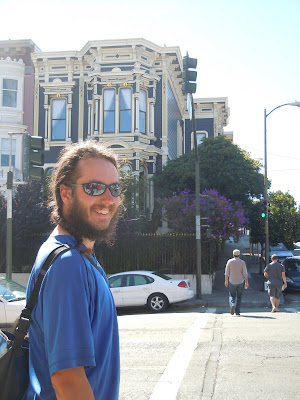 On foot is much slower than by bike. 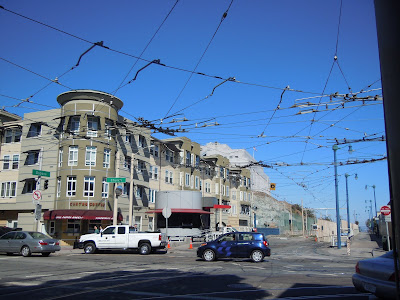 Well, it turned out that Lindsey is one of the nicest people ever. Once we got to her apartment, she showed us right in, let us take showers and even took us on a short walk to see the famous houses called the Painted Ladies which are just up a steep hill from her apartment. In the evening, she cooked us a delicious dinner and it was so much fun to share stories about our trips. She and her husband biked across the country last year, so she had some GREAT stories. To top it all off she even offered to drive us to the airport in the morning, instead of having to hire a van/shuttle to get us. 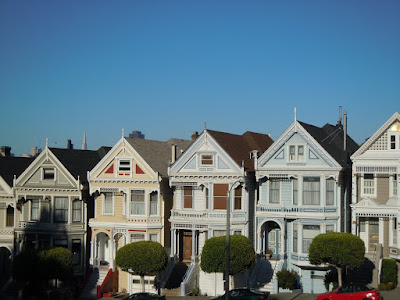 The Painted Ladies.
As we drifted off to sleep tonight, Jenny on the couch and Brett on a sleeping pad on the floor just below (we could still hold hands), we talked about how fitting it seemed to start and end our trip with a Warm Showers host. 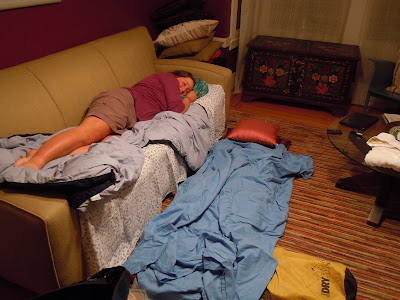 Our cozy spot for night.
An amazing thought: Tomorrow, we will be HOME! 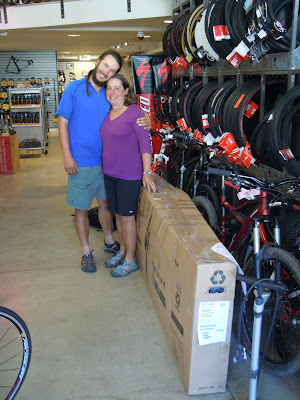 The last photo of us with our bike.