Since getting the tandem, we've taken several successful rides with it! We've ridden downtown a couple of times, and enjoyed ourselves every time we get on the bike. Guy was nice enough to take some pictures of us on one of those rides. 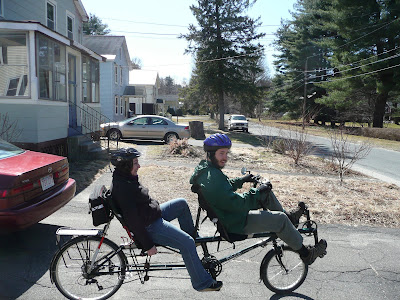 We're still making small adjustments to the seat positions, and Brett is learning how to shift more effectively on a tandem. Jenny is adjusting to the stoker position where there is little control over the bike. Mostly, we're learning to communicate better both verbally and non-verbally (through pedal strokes and leaning and such) to make the experience both more fun and more relaxing! We're pretty confident that the small kinks will all get worked out well before we depart Northampton this Summer.
For those who've never tried a recumbent bicycle, it allows a more relaxed body position, and a comfier seat. It also allows for more expansive views to the front (for Brett) and to the sides (for Jenny). In that sense, things just seem easier on the recumbent tandem. Of course, going up hills can be at a bit more "relaxed" pace, too, but we have plenty of gears and we never thought we were going to set any speed records. We have three months for this adventure, after all! 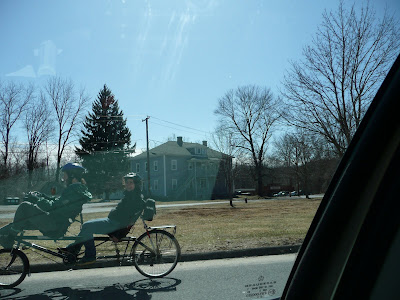 In other news, we ordered some new panniers from Ortlieb. They are blue! They'll hold the bulk of our gear on our trip, and perhaps our groceries on local trips before and after. We haven't decided whether to haul the trailer as well, or buy some more panniers instead. Suggestions? 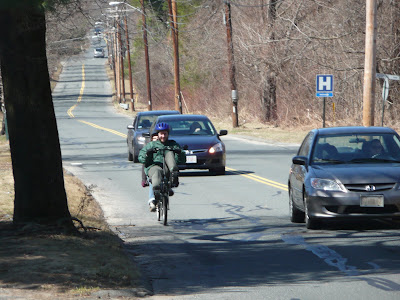 Here we are at the bottom of our first big hill!
Posted by Jenny at Saturday, March 20, 2010