The whole world was foggy when we woke up this morning. We were out of the tent by 7:00 and it was chilly! We ate some cereal with coconut milk and peach while we tried to use the Internet to look up phone numbers for bike shops near San Fransisco. We soon decided that we needed more to eat and a place that was warm. We weren't ready to leave yet, wanting to wait until some of the fog cleared, so we decided to have a second breakfast at the little cafe that was part of the campground. 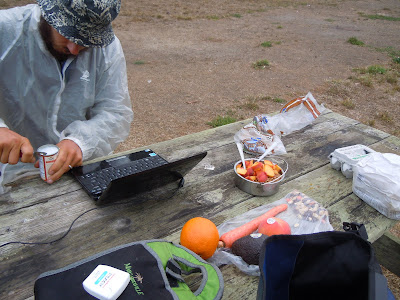 Our first breakfast on this chilly morning.
The food was expensive, but also pretty good. Being inside for a while warmed us up and after we had eaten we felt much more ready to pack up the tent and set out for the day. As we were packing up, a whole family began arriving to the campsite next to ours, and they were excited to hear about our trip, and we had fun talking with them as we readied ourselves for one of our last days of riding. 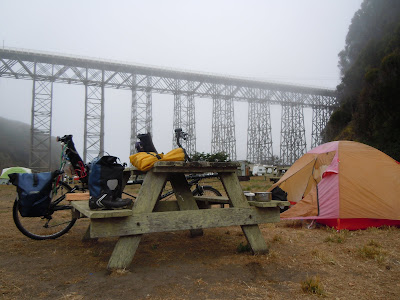 Even after our second breakfast, the ocean was still fogged in.
By this point in our trip, we're used to “late starts” and they don't bother us too much, but we are a little concerned about making it to San Francisco in time to pack the bike and still have a day to explore the city before flying out super early on the morning of September 7th. Also, we still haven't lined up a store to get bike boxes from and to serve as the pick-up point for shipping our bike home. Since our phones still didn't work where we had camped, we really were eager to get on the road (despite the 14% grade to climb just to get back to it). 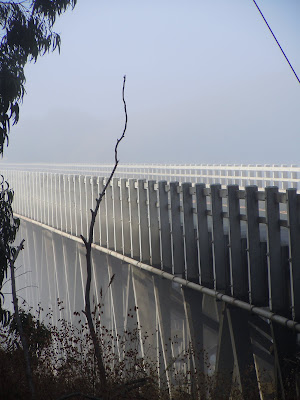 View of the bridge we are about to cross after we made it out of the campground and up the steep hill!
It was very slow going even after we got underway. There were some climbs that kept us feeling like we were slogging, and we didn't have the amazing views of the ocean to perk us up because it was still all foggy in that direction. The roads were clear of fog, so there were no safety issues, just aesthetic ones. 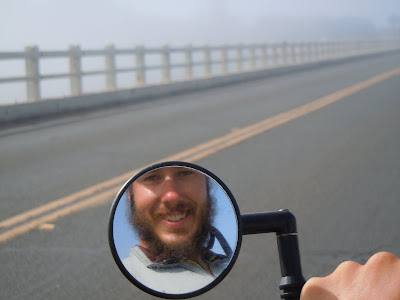 Good morning world!
We stopped in the little town of Elk and purchased some more expensive food. These little towns in California seem to be more expensive the closer we get to San Fransisco. Perhaps they simply survive on tourists and inflated prices. The store we shopped in did have freshly baked cookies, still warm from the oven, though! We bought two and ate those right away, while we packed up the other food we had bought and contemplated the rest of the day. 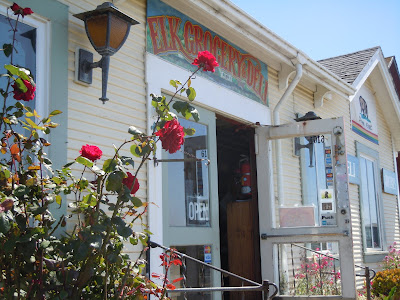 This store had warm cookies.
It was hard for us to get in the mood for biking today. We just didn't feel like it. Also, the unfinished plans for shipping the bike home and finding a place to stay in San Fransisco had us on edge and it was hard to relax and just enjoy where we were in the moment.

Of course, there isn't much else to do but get back on the bike and pedal some more. After our cookies disappeared, we pedaled on. One thing about the biking on the coast line is that the riding is very much up and down. There are hardly ever any flat sections. On one crazy steep hill, it got so steep around a corner that Jenny was worried we were going to flip over backwards. We didn't, but that is an indication that we are climbing some awfully steep hills! 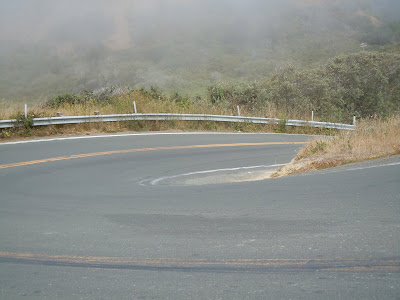 It was hard to get a shot of this switchback that truly shows just how steep it was. We will just say that Jenny does NOT want to bike this part again.
When we arrived in the next town, this one had a decent-sized grocery. We stopped to use their bathroom, to buy supplies for dinner (egg noodles, Brussels sprouts and hot dogs), and of course just to take a break from the biking. It's very frustrating when you know you ought to be enjoying something more than you are, but it's just not being fun.

After shopping for food, we found we were hungry and dug out the calzones we'd bought earlier. Sadly, they weren't very good at all. The fillings were okay, but the crusts were awful: hard, tasteless, and in the way. We sat in the sun in the parking lot on the other side of the road from our bike, but the pavement was too hot. We sat in the shade next to our bike, but it was too cold to be comfortable. Brett went back to the sun, while Jenny preferred the shade. We each called our parents, and Brett spoke with a teacher from school, making plans for next week. So strange that next week we'll be doing something so different, so normal, so stationary.

After long conversations we set off again. It was getting to be the time of day that most bikers out touring would start thinking about a place to stop for the night. For us, it was our best biking of the day! Maybe the rest helped. Probably talking to our parents helped. Anyway, we were having fun again! 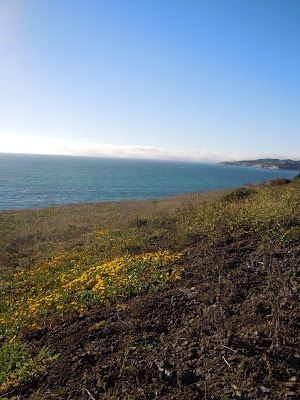 For the first time today, we can see the ocean!
Two bikers caught up to us from behind and they both turned out to be fellow touring cyclists that we've seen before, but this was the first time we'd seen them riding together. Ken, the fellow biking home to San Francisco, was pedaling together with a young woman we've seen a few times, but never spoken with until now. We saw her first as we entered the redwoods, and then again in Arcata, but only now did we get a chance to chat with her. It's her first tour, and she's not camping, but she's self-supported and going all the way to Los Angeles.

One of our favorite parts of the day was when we saw what we originally thought was a kite, fairly stationary in the sky between the road and the rocky shore. Then we realized it was a bird! (For those birders out there, we're pretty sure it wasn't a kite, as in the bird.) We saw lots of birds of prey in the next few minutes, and many of them were catching the breeze just right to seemingly float in the air! It was one of the neatest things we'd seen in a while. We stopped to ogle some, and then we were on our way again. 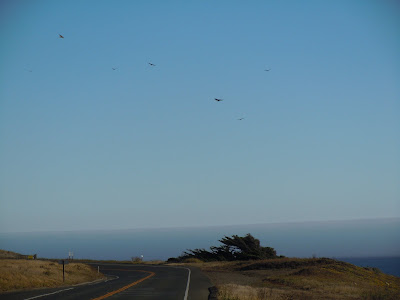 Birds floating in the air.
It took us a while to find the campground tonight. After climbing up a decent hill, we found what we thought was the turn and started to go down. We fervently hoped we wouldn't have to come back up tonight. Fortunately, we didn't, and although the campground was all full, they had a hiker/biker area. We had the great pleasure of sharing the area with two other touring cyclists, a couple from Germany. They are also touring the coast by tandem! They were riding a Hase Pino, which we were extremely excited to see in person, because they are only made in Germany, and we had only seen pictures before. 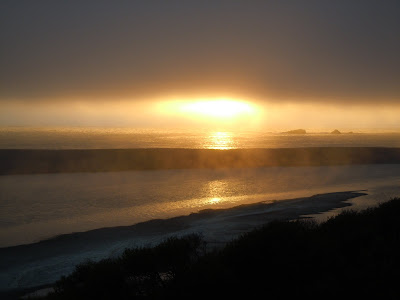 The sunset shortly before we found our campground.
Our evening was topped off with a delicious dinner of noodles, hot dogs, Brussels sprouts and cheese, AND marshmallows for dessert! Nadia had never eaten marshmallows before, and her husband, Dieter, was excited to have them again! Marshmallows aren't something Germans have, and Nadia hadn't necessarily believed the tales she'd heard of Americans roasting them. She also gave him a razzing, because she had no idea he'd eaten them before, on a previous trip to the United States a long time ago.

As we sat talking and roasting marshmallows over the fire, we felt so lucky tonight. Everything worked out today. It was tough at times, yes, but here we are, safe and happy, with friendly people, sharing a campsite and a warm fire. This trip is almost over, and it's been such a great adventure. 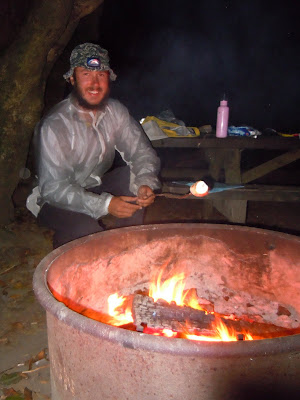 Brett was delighted to have a fire. Marshmallows were a real treat, too!
One last bit of excitement before bed, was our second run-in with raccoons on our trip! While we had our backs turned, enjoying the fire, forgetting completely about the bag of marshmallows resting unguarded on the picnic table, Brett once again got to jump up and chase a thieving raccoon who was making off with our treat!

There were at least two raccoons together, probably a mama and a baby. The animals continued to lurk in the darkness, only their eyes glowing from our flashlights, until after we retired to our tent. They could be heard prowling for a while after, climbing back up on the picnic table and pawing our bags. (All our food was safely locked in the boxes provided for the night.) Sorry raccoons, no treats for you tonight! Better luck next time.
Posted by Jenny at Friday, September 03, 2010